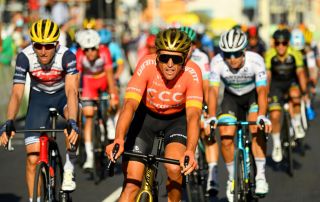 CCC Team's Greg Van Avermaet said after stage 2 of the Tour de France in Nice on Sunday that he'd ridden it "like a one-day race", putting everything into trying to win the stage, knowing that it would also have netted him the yellow jersey. In the end, however, the Belgian had to settle for fourth on the stage.

With overnight leader Alexander Kristoff (UAE Team Emirates), second-placed Mads Pedersen (Trek-Segafredo) and third-placed Cees Bol (Sunweb) – who all took bonus seconds on the line on stage 1 – having been dropped on what was a much tougher second stage of the race, whoever could win the day would also take the leader's yellow jersey.

Van Avermaet was one of many with a similar plan in mind, but it was always going to be a select group that would get over the day's first-category climbs of the Col de la Colmiane and the Col de Turini, before tackling the Col d'Eze and the Col des Quatre Chemins later in the stage, and it was on the last climb that eventual stage winner and now new race leader Julian Alaphilippe (Deceuninck-QuickStep) made his move with 13km to go.

The Frenchman took first Sunweb's Marc Hirschi and then Adam Yates (Mitchelton-Scott) with him, and the trio quickly built up a lead of almost 30 seconds over the chasing group, which included Van Avermaet and all the pre-race favourites for the general classification.

Those favourites were happy to watch each other and keep their powder dry, but as Alaphilippe, Hirschi and Yates weighed each other up going under the red kite signifying a kilometre to go, with a stage victory and the race lead at stake, Van Avermaet and the chasers sniffed an opportunity, closing to within what was just a couple of seconds on the line.

"It was a super-hard stage, but I had in my mind that I could take yellow and the stage win, so I was giving it everything, like it was a one-day race," Van Avermaet said on his team's website.

"Unfortunately, three guys were in front and, of course, they were the best," the reigning Olympic road race champion admitted. "In racing, anything can happen, and I played my cards, and it's a big disappointment. If you come that close, if you survive those kinds of climbs, with those kinds of riders, it would be nice to come closer to victory, but it is what it is. I can't change it."

Fourth on the stage and now 17 seconds down on new race leader Alaphilippe, in the same time as some 30 other riders, Van Avermaet may have seen his opportunity to take yellow pass him by, but he's already identified other possible chances for stage wins.

"First, I'll recover, and then hopefully there are other good stages for me. Maybe on stage 5, with the uphill sprint, I can do well," said Van Avermaet, considering Wednesday's mainly downhill, 183km run from Gap to Privas. "The legs are responding well, I think. I hope this wasn't the last chance for me for a stage win."