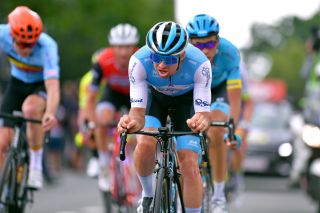 Tom Van Asbroeck will remain at Israel Start-Up Nation until the end of the 2022 season after signing a two-year contract extension with the team. The Belgian joined the squad from EF Pro Cycling ahead of the 2019 season.

Van Asbroeck enjoyed a consistent maiden campaign at the team, then operating as Israel Cycling Academy, and he finished the year on a high note with victory at Binche-Chimay-Binche.

The team stepped up to WorldTour level in 2020 and rebranded as Israel Start-Up Nation after taking over Katusha’s licence. The 2020 roster boasts new fewer than 16 new arrivals, including Dan Martin, André Greipel, Alex Dowsett, Nils Politt and Dani Navarro.

“I joined this team because I saw a project on the up,” Van Asbroeck said in a statement released by the team on Monday. “But the great thing that happened to me here was not only the team kept growing – but also me. This team helped me further improve, and what happened in 2019 was the testament of that.

“So, when the team approached me a few weeks ago, in the middle of the Corona crisis and offered me an extension – it was the easiest decision in the world for me. They said that I could take my time, but I said: I am ready now! It’s a huge honour for me and a great reward.”

Van Asbroeck, who was bronze medallist in the under-23 Worlds in Valkenburg in 2012, also placed second at Paris-Bourges and third at the GP La Marseillaise in 2019. He began his professional career with Topsport Vlaanderen before stepping up to the WorldTour with LottoNL-Jumbo in 2015.

“I am 30 years old now, and I plan to ride many more years,” Van Asbroeck said. “Frankly, my biggest dream is that I will spend the rest of my career with ISN and help it reach its full vision and goals.”

Van Asbroeck’s contract extension was welcomed by manager Kjell Carlström. “He is always 100% dedicated, has great insight, and helps the team towards success,” he said. “He can strengthen both a Classics and a Grand Tour squad, as well as enhance the team spirit with his positive attitude.”