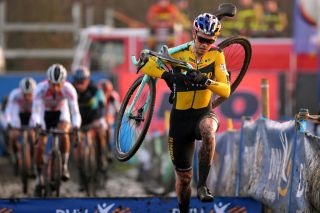 Wout van Aert (Jumbo-Visma) landed on his first cyclo-cross podium of the season, finishing second to world champion Mathieu van der Poel (Alpecin-Fenix) in the C2-ranked Kasteelcross in Zonnebeke, the penultimate race before the UCI Cyclo-cross World Championships in Dübendorf, Switzerand next week.

Van Aert was surprised at how he felt. "It was a very tough cross," Van Aert said. "I had a better feeling than expected because I was feeling a bit sick the past days. So I didn't know what to expect. Today was a matter of finding the right balance and trying to keep a steady pace.

"I am very happy with my first podium and with the progression I am making every week. That gives a lot of confidence."

Jens Adams, who missed out on making Belgian squad for Worlds, was third.

Although Van Aert had a strong showing, he was still 35 seconds in arrears of Van der Poel, who surged on the first lap and soloed to victory.

"I felt pretty good right from the start," Van der Poel told Sporza. "There was a bit of trying to find the right lines behind all the wheels, but once I could ride my own lines, I was satisfied with my race.

"The course was treacherous with a lot of deep ruts. I had to watch all the time. On the off-camber I struggled a few times but was also perfect a few times."

The Hoogerheide World Cup on Sunday is the final test for the riders before Worlds. "The cross tomorrow is a real home race. It is always nice that a lot of people come to watch that I know. I'm already looking forward to it," Van der Poel said.

Both Van Aert and Betsema are trying to ramp up for the Worlds after time away from the races: Van Aert because of his serious injury from the Tour de France and Betsema after a ban for two positives for anabolic steroids during last year's 'cross season.

The Pauwels Sauzen-Bingoal rider successfully argued the positives were the result of cross-contamination of supplements from a pharmacy and received a six-month, off-season suspension from the UCI. Her case was finalized this week, allowing her to return to racing immediately.

Her teammate Laura Verdonschot told Sporza she thinks Betsema can be a wildcard at Worlds. "If Betsema is selected for the World Championships, she can be the surprise. She doesn't have much rhythm yet but she doesn't have the tiredness we have from a whole season."