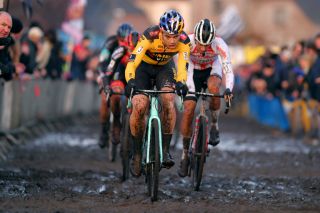 Wout Van Aert earned selection for the Belgian team for the 2020 UCI Cyclo-cross World Championships which take place on February 2 in Dübendorf, Switzerland. The country's national coach Sven Vanthourenhout has been assured that Van Aert will be at his best for the championships after making his return in December from the devastating leg wound he suffered in last July's Tour de France.

Although ranked behind two compatriots who were not selected (Gianni Vermeersch and Jens Adams), Van Aert, a former triple world champion in the discipline, can play a key role in the team's main goal: making it difficult for the dominant Mathieu van der Poel to win back-to-back titles in the elite men's race.

"I spoke to Wout this morning," Vanthourenhout told Sporza.be. "His desire and his ambition to ride the World Championships have only grown in recent weeks. He is also in good condition. I expect a very good Wout van Aert at the start, the best of this season. If that is the best we've ever seen, I don't know. But I am convinced that he will play a very important role."

Van Aert was the last rider to beat the Dutchman in a major race – the 2018 World Championships in Valkenburg. Since then, Van der Poel has been on a tear, winning all but three cyclo-cross races he started.

With his second WorldTour season with Jumbo-Visma ahead, Van Aert will have to adjust his training a bit to be at his best. "Let's say that his training sessions have not been in function of the races he has already done to date. But there have been signs that point to change. I also spoke to his trainer. We will see the best version of Van Aert in Dübendorf. "

"Van Aert is also an important pawn off the bike. He is a leader, he has his record. He is looked up to. When he opens his mouth, the rest will listen. That is also important. He will be involved if necessary and then everything will come in line."

Hermans earned the nod with a strong performance in the Nommay World Cup this weekend, edging out Gianni Vermeersch in the selection.

Vanthourenhout expects the largely flat and wide-open course in Dübendorf to lead to a fast race.

"That might work out well for us. It is not a course like we get almost every week in Belgium with, so to speak, 100 turns on a small course," he said. "They are fairly long turns where you can keep the speed high, there are many long straightaways. If it's dry you can get a completely different course. Then it becomes very difficult to make a selection and tactical racing is possible."

It's not just the elite men's title that Vanthourenhout is aiming for. He still has confidence in defending elite women's champion Sanne Cant, even if her Dutch rivals like Ceylin Carmen del Alvarado, Annemarie Worst and Lucinda Brand have gotten the better of her this season.

"Last year we had 6 medals, I think that is still possible. We know we are having a hard time with the women, but I still have every confidence in Sanne Cant. I believe she will still fight for the medals and I hope for the highest.

"In the youth categories, we do pretty well. We have one big candidate world champion," Vanthourenhout said without naming Thibaut Nys, who has been dominant in the junior men's ranks. "But internally we have made a bet and I still assume two titles."