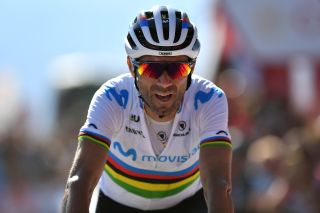 Alejandro Valverde’s chances of a sixth GC podium finish in the Vuelta a España at the age 39 have increased considerably after the Movistar racer launched a ferocious attack on the stage 15 Alto de Acebo summit finish.

When the reigning World Champion lunged out of the favourites group six kilometres from the summit, only race leader Primoz Roglic (Jumbo-Visma) could follow the Spaniard.

After working together, Roglic attempted to shake off Valverde on the steep cement section leading up to the finish, but his accelerations proved fruitless.

Valverde showed that despite falling in Saturday’s big crash, his form remains undented and even if shaking off Roglic is impossible for now, a runner’s up spot in Madrid looks to be increasingly on the cards.

“Grandpa, you haven’t said the last word,” one Spanish reporter joked with Valverde at the finish, to which the 39-year-old responded with a grin, “Nope, Grandpa’s not said his last word yet.

“If I hadn’t gained any time today that would have been a problem, but I had good legs, and I attacked to see what would happen.

“Me and Roglic worked well together, whether he was the strongest is hard to say, we all suffered.”

Valverde was the most impressive of Roglic’s GC rivals by far on the race’s second of a trio of summit finishes across stage 14. However, it was plain Valverde’s targets were the men behind him on GC, rather than the lone man ahead.

“I don’t know if I’m up to fighting to win the Vuelta outright,” said Valverde, who last finished on the podium in 2014. “But I’ll be going for first or second from now on.”

Valverde also praised teammate Marc Soler for waiting for him on the climb to provide support. Unlike in Andorra, where Soler had visibly expressed his anger at having to drop back when leading the stage to help Movistar co-leader Nairo Quintana, on this occasion, the Catalan did his domestique’s job without the slightest sign of complaining.

“I’m doing better and better as we get into the third week, it was a good day for the team,” Soler added before expressing his satisfaction about helping Valverde and the end result for his team leader.

“OK, we didn’t get time on Roglic, but we’ve gained time on the rest.”

As for whether Valverde’s working with Roglic meant that the Spaniard would now settle for second in Madrid, Soler disagreed.

“We’re fighting for the Vuelta, and we’ll go on fighting for it,” Soler said. Or as Valverde would put it, “Grandpa’s not said his last word yet.”