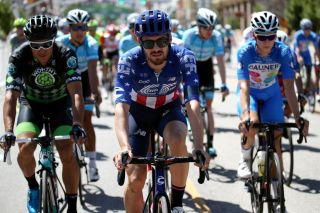 USA Cycling has revealed its 2020 Pro Road Tour calendar with little surprise in the 17-event schedule comprised of 43 total days of racing in 15 states.

The Maryland Cycling Classic, a one-day race that will feature on the UCI's inaugural Pro Series calendar, is the big new addition to the Pro Road Tour, which will maintain its core of races from this year.

"As we enter into our fifth year of the Pro Road Tour, we are looking forward to another strong year of pro racing in the United States," said Tara McCarthy, director of national events for USA Cycling.

The Pro Road Tour comprises the top road race events in the US and is open to both professional and amateur cyclists. USA Cycling convinced the UCI to change its rules so that Pro Continental teams could compete in non-UCI events on the calendar, which is also open to domestic elite amateur teams.

The series is a mix of criteriums, omniums, road races, stage races and an individual time trial. Individual and team champions are crowned at the conclusion of the calendar.

"We believe that the races on our calendar, including a range of events including single day criterium racing all the way up to UCI Pro Series races at the Tour of Utah and the new Maryland Cycling Classic, exhibit the high caliber of racing that our racers and fans are looking for," McCarthy said.

The series starts in Arkansas on April 2 with the four-day Joe Martin Stage Race, a UCI 2.2 event for both men and women. The series heads further south next for two days of racing on April 18-19 at the Alabama Cycling Classic.

From there the series shifts to the west for the Redlands Bicycle Classic, a five-day stage race in Southern California that has been a staple of the US circuit for more than three decades. The race runs from April 22-26. The UCI 2.2 Tour of the Gila and its legendary "Gila Monster" final stage are next, taking place April 29 through May 3 in Silver City, New Mexico.

The Armed Forces Cycling Classic keeps things rolling the following weekend with a pair of criteriums in Arlington, Virginia. The MVP Healthcare Rochester Twilight Criterium is up next in New York on June 6, one day before the three-day criterium omnium starts at the Tulsa Tough, which runs June 7-9.

The Pro Road Tour then moves back to the west again, with the Chrono Kristin Armstrong individual time trial in Boise, Idaho, on July 10. The series stays over in Boise for the Anderson Banducci Twilight Criterium on July 13 before heading to Utah for the Larry H. Miller Tour of Utah, a seven-day stage race with the UCI's new 2.Pro designation, the highest rank beneath the WorldTour. The August 3-9 men's-only race is America's premiere multi-day event now that the Tour of California is off the 2020 UCI calendar.

The women's-only Colorado Classic is next on the Pro Road Tour calendar. The four-day UCI 2.1stage race starts August 27 and runs through August 30.

The series moves east again to the Gateway Cup in St. Louis, Missouri, for a four-day criterium omnium September 4-7.

The Maryland Cycling Classic debuts September 6 on the UCI ProSeries. The one-day men's only event hopes to attract nearly a dozen WorldTour teams as it takes place just ahead of the one-day WorldTour races in Quebec and Montreal.