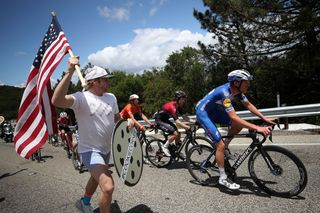 The US will host a UCI Pro Series race in Baltimore next September (Image credit: Getty Images Sport)

US city Baltimore, Maryland, will host a one-day UCI Pro Series race in 2020 the week before the pair of Canadian WorldTour races in Quebec City and Montreal.

Scheduled for September 6, the day before the American Labor Day holiday, the Maryland Cycling Classic will fill a spot on the UCI's newly designated Pro Series calendar, a second tier below the WorldTour for races formerly designated as 1.HC or 2.HC. Organisers expect a minimum of 10 WorldTour teams to compete in the event.

"We are excited to host the Maryland Cycling Classic in 2020 and showcase all that our great state has to offer to the international cycling community," Maryland Governor Larry Hogan said in a statement released by the event organisers.

Baltimore's relationship with modern professional cycling dates back to the Tour de Trump, a stage race named after the current US president that covered cities along the Eastern seaboard in 1989 and 1990 before rebranding itself as the Tour DuPont.

"There are so many communities in Maryland that have a deep and rich tradition for cycling, and this event will celebrate this history while marking a new era for the sport in our state," Hogan said.

Steve Brunner, president of KOM Sports Marketing, told Cyclingnews that organisers have been working with the state of Maryland, the UCI and USA Cycling since February to bring the race to fruition, with all of the necessary elements only recently coming together to make it happen.

"As you know with these things, the moons really have to align to bring something of this size and scope together," Brunner said.

In this case, those aligning moons involved the State of Maryland's desire to host a large event that could draw large crowds and television coverage that shows the city to an international audience; race organisers seeking a sustainable financial model that a one-day race provides; and the UCI's mandate to expand one-day races outside of Europe.

Combined with the fortuitous spot on the calendar just ahead of the WorldTour races in Quebec and Montreal, the pieces needed for an international one-day race in the US fell into place.

The race also has the support of Kelly Benefit Strategies' John Kelly, the newly-appointed chairman of the race host committee and a prominent local business owner. Kelly, who previously sponsored the team that is now Rally UHC Cycling, has strong ties to both the cycling community and Baltimore business community.

"For the state of Maryland, and particularly the city of Baltimore to secure a race at this level is huge," Kelly said. "We have a great opportunity to bring our state and city together to feature the beauty and goodness of Maryland and Baltimore to cycling fans and enthusiasts across the country and around the world."

Route details were not released with today's announcement, but organisers expect a finish in downtown Baltimore. Medalist Sports, which organises the Larry H. Miller Tour of Utah and other top American cycling events, will manage and market the race for the Maryland Sports Commission, which owns the event.

Organisers did not announce details for a women's race in 2020, but Cyclingnews understands from people familiar with the event that they are looking to develop a women's race in the future after focusing on launching the men's event next year.

"We have a lot of objectives with the event under this new model, among them community engagement, impactful activation, and sustainability," Brunner said when asked about the potential for a women's race. "The women's event has been discussed as a priority with host organisers."

"Obviously this starts with the one-day Pro Series event," Hasseltine said. "We are assessing and evaluating other components that we can put in and around the Pro Series, and definitely a women's race is high on our list as an event to consider.

"What we're able to accomplish in year one as opposed to year two or three will tell with the potential incoming sponsors and the revenues that we can generate through the event," he said.

The Maryland Sports Commission and race organisers are banking on attracting large crowds in 2020 with pre-event activities throughout the Labor Day weekend, including a health-and-wellness festival, an expo area with exhibits, mass-participation cycling and running events and other community-outreach programmes.

The 2015 UCI Road World Championships in Richmond, Virginia, drew more than 300,000 spectators during the week of activities, according to race organisers, and Maryland Cycling Classic organisers are hoping for similar numbers to Richmond both on the ground in Baltimore and over the airwaves via television and live streaming.

The Richmond World Championships stands as the biggest one-day race in American cycling after the eventual demise of the Philadelphia International Cycling Classic, which ran from 1985 through 2016 under various iterations, although that race admittedly lost most of its "international" lustre in its waning years.

"This is a great boost for American road cycling," said US pro Ben King (Dimension Data). "There are tons of passionate fans on the east coast of the US. This will give them an opportunity to experience world-class cycling.

"We've been missing a big one-day race in the US for several years," King said. "The Worlds in Richmond proved the east coast is starved for big-time professional cycling because we had huge crowds."