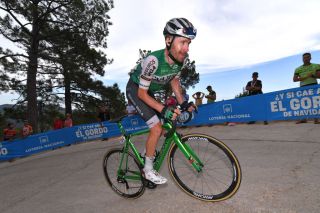 The Caja Rural-Seguros RGA team is facing a suspension from the UCI after one of its riders, Domingos Gonçalves, was notified of an anti-doping rule violation (ADRV), the second case within a 12-month period for the team.

Gonçalves was hit with the ADRV for "Use of a prohibited substance based on abnormalities from 2016 and 2018 detected in his Biological Passport", the UCI announced on Thursday.

What is unusual in the case is that the team's other doping positive, another Biological Passport case, came from former rider Jaime Roson, who was in the midst of a two-year contract with Movistar before he was banned for four years as a result of his ADRV in February.

Roson and Gonçalves were teammates in 2016 on Caja Rural, but were not on the same team this year when the doping cases were initiated.

While Gonçalves is provisionally suspended pending adjudication of the case, the UCI considers his the second ADRV for Caja Rural-Seguros RGA. Roson's abnormalities date back to 2017, and Gonçalves' 2016 abnormalities it says are in the "same twelve-month period (2016-2017)" and this triggers article 7.12.1 of the UCI Anti-Doping Rules providing for the suspension of the team from 15 days to 45 days.

The UCI Disciplinary Commission is responsible for selecting the length of the team's ban.

After 2016, Gonçalves left Caja Rural for the Continental team Radio Popular Boavista, where he raced for two seasons before returning to Caja Rural in 2018. His only victories came on home soil, with a pair of time trial titles and the 2018 road race championship and a stage in the Volta a Portugal in 2018.

Caja Rural issued a statement saying it had already ended its contract with Gonçalves ahead of 2020.

"On Thursday, December 12, the team has received a communique from the UCI announcing the provisional suspension of the rider Domingos Gonçalves for an adverse result in his biological passport, months before his incorporation into our team in 2019," the team announced on Twitter, adding that before joining the team in 2019 the rider's values showed no anomalies.

"As defenders of the credibility of cycling and fair play, and complying with the anti-doping regulations of the UCI, our team provisionally suspends the employment relationship with the rider. In any case, as already reported last September, Domingos Gonçalves will not be part of our team in the next 2020 season."