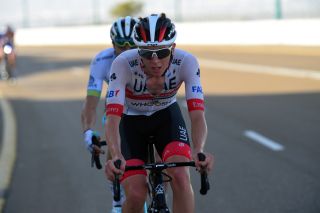 Tadej Pogacar (UAE Team Emirates) refuses to throw in the towel at the UAE Tour despite losing out to Adam Yates on the stage 3 climb to Jebel Hafeet. The Slovenian – who started the seven-day race as the firm favourite – failed to respond when Yates launched his initial move 6km from the summit, and despite firing off his own vicious counterattack that pegged Yates back to around 15 seconds, the UAE rider crumbled to 1:03 at the line. Yates now leads the race by 1:07 ahead of Pogacar.

"Maybe I'm a bit disappointed with my ride but then I saw how good Adam was. In that heat and at full gas, it was still really good," the young Slovenian said at the finish.

"Maybe I could have followed but for sure he would have won because he was stronger. Maybe the gap wouldn't have been as big though."

Pogačar: UAE Tour will be my first big goal of the season

The race returns to the same climb on stage 5, while the other remaining days are likely to end in bunch sprints. It's hard to look past another Yates win in two-days time considering his dominance on Tuesday, but Pogacar, who won in Valenciana earlier this year, at least gave the impression that he would carry the fight until the end.

"For sure I will try but he's really in good shape. I'll do everything to attack him but we'll see."

The UAE Team Emirates squad certainly had the numbers on the final climb today with Pogacar ably supported by Davide Formolo and Diego Ulissi, but their numbers counted for little when Yates burst clear.

"We weren't expecting him to go but when he went he went really, really hard," Neil Stephens, the UAE Emirates team director told Cyclingnews.

"It's not a matter of should we have gone or not, we should have gone. I thought 'shit' he's got that gap. I thought 'let's stay calm for a second'. Then we tried to pick him up. It didn't happen and that's when we had to make a move with Tadej.

Pogacar quickly made up ground with his attack, cutting through Alexey Lutsenko and David Gaudu after they had briefly joined Yates. However, despite knocking Yates's lead down to under 20 seconds Pogacar eventually ran out of steam as the line approached.

"He got within about 15 seconds of him but didn't get any closer," Stephens said. "It wasn't as though Tadej did a bad climb, it was just that Adam was better. That's all we can say. Tadej did a great climb, it just wasn't good enough."

Barring a catastrophe or a major shakeup, the GC is probably heading to Mitchelton-Scott. That leaves Stephens with the task of keeping the motivation high within his team's camp. There are still plenty of chances for the team to shine with Fernando Gaviria for the sprints and Pogacar set for a second chance to take on Yates during stage 5.

"We're still up on the podium and we still have stages to go, including two days when we're back on the mountain again. We've also got some flat stages with our sprinters, and we'll obviously fight every day. The teams' classification is also a big aim."