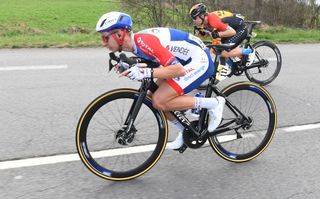 Anthony Turgis has signed a two-year contract extension with Total Direct Energie, the team has reported. The 26-year-old Frenchman joined the French ProTeam at the start of the 2019 season from Cofidis.

"I quickly felt comfortable with the team, and that helped me have a good first season," Turgis said in a team press release on Sunday. "The staff and I have a relationship of trust, so there was no reason for me to leave.

"I'm always very interested in the Flandrian Classics. It's a goal that we set with the team so that I'm at my best level for those races," the 26-year-old added, presumably including French race Paris-Roubaix among the Belgian 'spring' Classics, which have been rescheduled for October. Last season, Turgis finished 18th at what was the first Roubaix of his career.

"There's also the Tour de France, which remains very important for us," said Turgis, who's ridden the last two editions of the Tour, and has been named on the team's nine-rider shortlist for this year's rescheduled race, which starts in Nice on August 29. The squad will be pared down to the final selection of eight riders in the coming weeks.

Romain Bardet: It's good to have several cards to play at the Tour de France

Last season, Turgis won his first race for the team at the GP La Marseillaise, and went on to take second place at the Dwars door Vlaanderen and his 18th place at Roubaix later that spring, and then also won the one-day Paris-Chauny in late September.

He again started the interrupted 2020 season strongly with eighth place at La Marseillaise, and took second place on the opening stage of the Tour des Alpes Maritimes et du Var.

"I'm very happy to continue my adventure here, and will continue to give everything for the team," said Turgis.

Team manager Jean-René Bernaudeau is also looking at the possibility of further strengthening his squad with the likes of current AG2R La Mondiale duo Romain Bardet and Pierre Latour.

"We're looking at riders who can shine in the mountains, and Pierre is one of them, just like Romain Bardet," Bernaudeau said last week.

Bardet said this weekend that he was ready to share the AG2R leadership at this year's Tour de France with Latour.