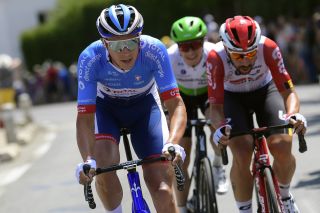 Total Direct Energie named nine riders to its Tour de France long team, with Niki Terpstra not making the cut as he recovers from serious injuries from a training crash.

These nine riders will head to an altitude camp in Font-Romeu on July 11.

Bonifazio won the bunch sprint on stage 5 in Paris-Nice stage 2 of the Saudi Tour this season. Calmejane won a stage in the 2017 Tour de France, while Taaramäe has won stages in the Giro d'Italia and Vuelta a España.

Terpstra, a former winner of Paris-Roubaix and Tour of Flanders, was injured in a crash while motor-pacing between Enkhuizen and Lelystad in the Netherlands on Tuesday, June 16. He reportedly swerved to avoid some geese and hit a rock, crashing heavily.

He was airlifted to hospital where doctors confirmed he has a collapsed lung, a concussion, and fractured ribs and a broken collarbone.

It was the 36-year-old's second major crash in a year. He went down in a mass crash during the 2019 Tour de France and fractured his scapula. Earlier in 2019 he suffered a concussion in a crash during the Tour of Flanders.

Terpstra is expected to be out of competition through the end of August, and the Tour de France begins in Nice on August 29.