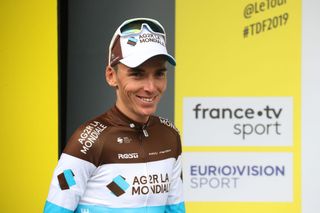 Romain Bardet has maintained that he can share leadership of AG2R La Mondiale at the Tour de France with Pierre Latour and he expressed hope that the event will serve as the ideal preparation for the World Championships in Martigny.

A podium finisher in 2016 and 2017, Bardet had initially opted to miss the 2020 Tour in favour of combining the Giro d’Italia and Tokyo Olympics. The spate of postponements and cancellations caused by the coronavirus pandemic saw the racing calendar heavily revised, however, and Bardet will now tackle the rescheduled Tour, which is set to take place from August 29-September 20.

“What happened was a hard blow for our sponsor and for the whole cycling economy, so the team immediately asked me to go to the Tour,” Bardet told L’Équipe. “It was a legitimate request and it’s fully in line with my state of mind. I'm a competitor and I didn't see myself spending September at home. It's also the best preparation for the Worlds [on September 27 - ed.]”

Although he won the king of the mountains title in Paris, Bardet endured disappointment on the 2019 Tour, where he had to settle for 15th place overall. He was circumspect about whether he would target the general classification in 2020. “At the Worlds, it might be the case that the best riders won’t be the ones who fought for the GC at the Tour, but rather the climbers who were able to take some stages ‘off,’ without battling every day,” Bardet said.

Pierre Latour, who won the white jersey of best young rider in 2018, was initially due to serve as AG2R La Mondiale’s sole GC leader at the Tour, while Bardet focused on the Giro. Both riders will now line out together in September.

“You can’t talk about a hierarchy. You can see how teams are built now, it’s good to have several cards to play,” Bardet said. “I won’t tread on Pierre’s toes and he won’t tread on mine. We complement one another and we get on very well. In any case, the race won’t rest on our shoulders.”

Bardet has been with AG2R La Mondiale since he turned professional in 2012, but his contract expires at the end of this season and he has been linked with a possible move to Sunweb in 2021. He told L’Équipe that he had yet to make a decision on his future.

“I’ve had time to think about it, but nothing is decided yet,” Bardet said. “Reflections are ongoing. It’s normal to wait for competition to start again to finalise it and plan for something else. The season hasn’t even started yet…”

Bardet and Latour are set to resume their seasons at La Route d'Occitanie on August 1.