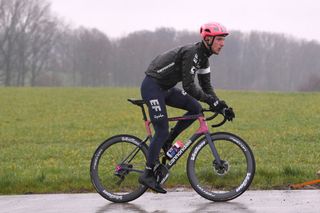 For a neo-pro, mistakes are there to be made, but what you might describe as a 'schoolboy error' cost 22-year-old Jonas Rutsch a potential shot at victory at Omloop Het Nieuwsblad on Saturday.

The German, who turned pro with EF Pro Cycling at the start of the year, made it into what turned out to be the decisive move, going clear with Jasper Stuyven, Yves Lampaert and five others with 75km remaining.

However, just under 15km later, he was surprisingly dropped, and while his former companions sailed clear to share the spoils, he was forced to drop back to the bunch and wonder what might have been.

"It was a stupid mistake from my side. It was not the legs or a mechanical – just a mistake," Rutsch told Cyclingnews at the finish in Ninove, although he didn't want to go into any more detail.

"I don't want to explain it now, but it was a mistake and it will never happen again. So I learnt already from my mistake and that's it."

Team director Andreas Klier later explained that Rutsch had tried to remove his rain cape but had trouble doing so. As he fumbled with the jacket, a gap opened to the other seven and by the time he'd got it off he was unable to close that gap.

"I didn't know at the time but I heard it 15 minutes ago, and it seems he tried to take off his jacket and it was obviously a side-wind, which he knew," Klier told Cyclingnews.

"He's coming from amateur cycling, it's his first Classic. 10 metres and he just couldn't get it off. 15 metres and it's race over."

Rutsch settled back into the main peloton and set about working to try and bring EF's leaders, Sep Vanmarcke and Jens Keukeleire towards the front of the race. Vanmarcke tried a counter-attack and was the team's highest finisher in 23rd, while Rutsch ran out of gas and did not finish.

The fact that the group he was in stayed away to the finish was obviously a source of frustration but Rutsch was not too hard on himself.

"It's really disappointing because I was in the group and I'm pretty sure I had good legs at that moment, and the control, and then that happens, and shit," he said.

"I'm a neo-pro and it's normal to make mistakes, the most important thing is that you learn something from your mistakes and I will learn from this."

Klier echoed the point that a young rider must be given room to make mistakes and learn from them.

"I wasn't angry. He's 21, and maybe the light switched off but now, at the moment, I see things a little differently. It's learning by doing. I'm not angry with him, and it's also not that we lost the bike race because he wasn't in the group anymore. It is what it is, the race is done, and probably the best rider won.

"I said to him, 'These are the things you have to learn. At this level, one mistake and you get punished immediately.' Who knows how far he could have gone, but I'm not lying awake for one millisecond because of that."

Klier affirmed that Rutsch, who won the U23 Gent-Wevelgem last year and has been touted by team manager Jonathan Vaughters as a future Paris-Roubaix champion, had a bright future ahead of him the Classics.

The 22-year-old himself won't have to dwell for too long on his mistake, as he gets another crack at the whip at Sunday's Kuurne-Brussel-Kuurne.

"Tomorrow is another day and let's go for it again," said Rutsch, who was clear about one thing: "I will not make that mistake again."