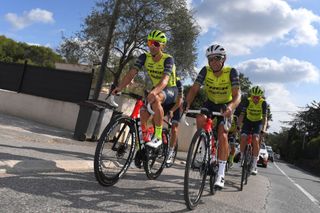 Trek-Segafredo general classification leaders Bauke Mollema and Richie Porte have said that this year's Tour de France is among the hardest of their careers, with a packed GC field and mountain stages from the first week onwards all contributing to the difficulties that lie in wait from Saturday.

Both men will be targeting top 10 finishes in Paris, to add to the four they've picked up between them at past editions.

The two big favourites – Ineos Grenadiers and Jumbo-Visma – will be expected to make the pace for much of the race, and Porte said that the Tour could be a case of just staying safe in the early stages.

The 35-year-old called the final week – with its four summit finishes including the stage 20 time trial – a "death march" to the finish. "It's not up to us to make the race," Porte said at the team's pre-race press conference.

"I think that if anything, the Dauphiné showed that if you can follow Jumbo or Ineos when they do the pace on the climbs, and stay out of trouble in these first few stages, then you can get to that third week where it's really going to be like a death march to Paris," Porte emphasised.

"The last week, the stages are so brutally hard that the race isn't over until Paris. I'd say that when I did the recon of the last stages, that this is probably going to be the hardest Tour. And it's such a hard start as well."

Mollema agreed with his co-leader, stating that the pair will hopefully be able to help each other in tough stage finals, where some solo team leaders could be isolated.

"We just have to be up there hopefully with the two of us," the 33-year-old Dutchman said. "Of course, you can help each other if you're both there in the finale and there's just a small group left. Just by being there I think that already would help a lot.

"I think there are a lot of strong teams, look at Jumbo-Visma, that will probably have a few guys up there – Ineos Grenadiers and several other teams as well – with strong climbers and GC guys, so you almost need to be up there with both of us to fight with them.

"My goal right now is to get my own top level in the next few weeks and to show that I can be up there with the best riders. I think I have had the best possible preparation in the last few months."

Both men agreed that the first week would be crucial to what happens during the rest of the race. Summit finishes at Orcières-Merlette and Mont Aigoual will be early GC tests, and with several big names (Romain Bardet, Julian Alaphilippe, Dan Martin) claiming to focus on stage victories, we'll get an early sense of who is really in the GC fight.

"Already after one week I think you know where you are compared to all the other competitors," Mollema said. "I think after a few mountain stages in the first week you can already take a decision for the last two weeks what to focus on. Then the last week will be brutal. I just saw the GC result of last year - four guys within two minutes – I don't think that will be the case this year."

Porte added that the racing could be hard for the whole three weeks, at least if the Critérium du Dauphiné was anything to go by.

"At the moment it seems like every GC leader from every team is saying they are here for stages or they are injured," said Porte. "I don't know what that means for the race If we race like we did in the Dauphine which, like I said before, felt like five one-day races back-to-back, then it could be hard for however long the race goes for. But fingers crossed that we can make it to Paris.

"I don't think there is ever an opportunity in the Tour to ease off, especially in the first week where it's a disaster if you lose seconds that's going to be minutes in the last week. At least we will know the order a little bit before Stage 4 and 6 the first proper hard finishes."