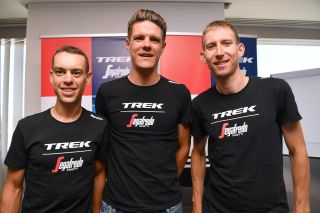 Trek-Segafredo announced Monday that Richie Porte and Bauke Mollema have been officially named as co-leaders for the Tour de France that is set to begin on Saturday in Nice. The team also confirmed that road race world champion Mads Pederson will race in a support role for his two team leaders, and has the opportunity to go for stage wins.

"The objective of our team is to go for the GC with Bauke Mollema and Richie Porte. But our other main goal is to win one or more stages. We will try to keep at least one of the captains up there for GC, and otherwise go full for stage wins," said the team’s director Kim Andersen.

It has been widely reported that Porte and Mollema would likely lead the team’s Tour de France roster, where they finished 11th and 28th, respectively, in 2019, while Vincenzi Nibali is set to concentrate on the Giro d’Italia.

Porte confirmed that of the two co-leaders, he will be the one primarily focussed on the general classification, though he won’t rule out a stage win if the opportunity presented itself. He also pointed to the Grand Départ in Nice, particularly stage 2, as being a decisive point during the first week. Porte started the season with a third place overall at the Tour des Alpes before the season shut down due to the COVID-19 coronavirus. He returned to racing this month with a sixth overall at La Route d’Occitanie, 18th at Tour de l’Ain and 15th at Critérium du Dauphiné.

“The objective for me is to go for a good GC result, which aligns with the team objective, along with taking a stage along the way. Last year we had [Giulio] Ciccone take a stage which was really good for morale in the team. It would be nice to go out and have a good Tour like that," Porte said.

“This year the Tour has a really hard start. I know the roads around Nice well, I think the first day will be tricky and stressful like it always is. The second stage is like nothing I’ve ever seen before. I think it’s really going to be a decisive stage, tactically I don’t really know what to expect. Some of the stages, especially in the Alps, look pretty good for me. We just have to see what happens.”

Mollema confirmed that while he will co-lead the roster alongside Porte, he would be looking for more stage win opportunities, particularly during the first week of the Tour. Mollema returned to racing on the revised season calendar at La Route d’Occitanie where he placed fifth overall. He followed that with a sixth overall at the Tour de l’Ain and fourth at Il Lombardia. The Dutchman said that he has prepared to have a strong start to the three-week race.

“I’m really looking forward to the Tour de France. Hopefully, I can be up there fighting for the GC and simultaneously looking for stages. In this Tour we will have some mountain stages already in the first week, so if I’m at a good level I think there will be opportunities to go for a stage win as well. In this strange year I think we have to seize every opportunity you can," said Mollema, who earned a Tour stage win in 2017.

"I’ve done quite a bit of recon, so I know the course pretty well. I’ve looked closely at eight stages and I know this will be a very hard Tour, especially the last week, when the race will be decided. However, the first week will already be extremely hard so you must be ready from the start.

"I’ve prepared well, the training has been good for the last months and I think I’ve shown to be on a good level in the races I did, specifically Occitanie, Tour de L’Ain and Il Lombardia. They went really well so hopefully I can build on that and show a good level in the Tour as well.”

Andersen said that he is expecting a difficult Tour de France because there are early mountain stages, but the team will also need to remain as fresh as possible for a challenging third week. Outside of their support for Porte and Mollema, Andersen would also like to see Pedersen, Stuyven and Thuens trying for breakaways and stage wins during the punchy second week.

"In the team we have some strong, fast guys like Jasper Stuyven, Mads Pedersen and Edward Theuns," Andersen said. "I think there will be many stages with breakaways, and we can try to put them in there. They will also be good to protect the leaders. In the second week we can give a lot of freedom to the Classics riders."