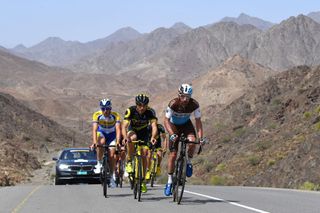 The breakaway on the queen stage of the 2019 Tour of Oman (Image credit: Getty Images)

The Tour of Oman will not take place in 2020 due to the recent death of Sultan Qaboos earlier this month, according to Belgian newspaper Het Nieuwsblad.

The six-stage race had been scheduled to run from February 11-16 but the likes of Mark Cavendish and Elia Viviani are now facing gaps in their calendars.

Green Mountain again to be decisive stage in Tour of Oman

Lutsenko wins the Tour of Oman

Following an initial three-day period of full national mourning, a longer 40-day period is in place in Oman, in which flags are at half-mast and the Ministry of Tourism has instructed the cancellation of events such as concerts.

However, it appeared the 11th edition of the race would go ahead when the route was announced on January 16, six days after the death of Qaboos. The race is run by Tour de France organiser ASO, which was not available for comment on Tuesday morning.

Sultan Qaboos was the longest-serving ruler in the Arab World, after taking power from his father in 1970, and oversaw a period of significant development in Oman. Investment in sport was a key part of presenting the modern vision of Oman and the Tour of Oman was seen as a success story, attracting a host of top-level riders.

The Tour of Oman was first held in 2010 and has established itself as an early-season test for Classics specialists and sprinters. The key stage in the contest for the overall title comes on the steep slopes of Green Mountain, with Astana's Alexey Lutsenko winning the past two editions.

Among the names confirmed for the 2020 edition were sprinters Cavendish and Viviani, along with Cofidis' Jesùs Herrada, who was third overall last year.