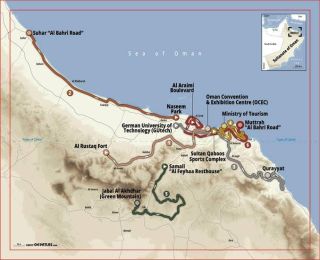 The 11th edition of the Tour of Oman will take place next month, with the summit finish at Green Mountain once again featuring on the queen stage.

A total of 911km of racing will take riders from the coast, through the capital of Muscat and to the mountain, which features for the 10th time in the race.

Oman is mourning the death of Sultan Qaboos bin Said, the country's leader for five decades who died at the age of 79 earlier this month but the race has been confirmed for February 11-16.

Sultan Qaboos bin Said was largely responsible for modernising the gulf nation from a rural, impoverished country to the booming country it is today. His successor Haitham bin Tariq Al Said has vowed to honour Qaboos' legacy of diplomacy, peace and coexistence in the region.

While the route press release made no mention of the change of power, Qaboos will likely be honoured along the roads he helped build as riders travel inland from Rustag past its 12th-century castle for a flat finish in Muscat - one that's perfect for a late attack.

On stage 2, the sprinters will likely have their day with 167.5km of racing along the coast to Suhar. The race's longest stage follows on stage 3, with a 190.5km trek to Quraayat and stage 4 - a short 120km dash starting at the Sultan Qaboos Sports Complex - both with enough short climbs to entice the Classics specialists to test their form.

Stage 5 is the queen stage to Jabal Al Akhdhar, known as "Green Mountain" where last year Alexey Lutsenko cemented his overall victory. The grand finale comes with a 144.5km stage to the Matrah corniche for another sprint-friendly stage that's unlikely to disrupt the overall standings.

Among those expected to compete in the 2020 Tour of Oman include Nacer Bouhanni, looking to refind his winning ways with his new Arkea-Samsic squad, Mark Cavendish who is also seeking a renaissance with Bahrain McLaren and Elia Viviani who will be keen to hone his new Cofidis squad's lead-out train.

Cyclingnews will have full race reports, results and photo galleries after each stage. Patrick Fletcher will be in Oman gathering exclusive interviews and news.