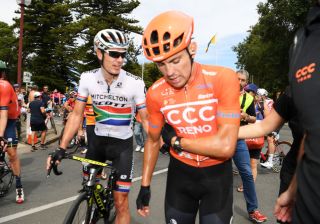 Daryl Impey comes over to check on Patrick Bevin at the 2019 Tour Down Under (Image credit: Getty Images)

Patrick Bevin (CCC Team) returns to the Tour Down Under later this month, almost a full year after he crashed at the race and lost the leader’s jersey on the final day of action.

Bevin, 28, won stage 2 of the 2019 Tour Down Under and held the race lead for four days. However, he crashed heavily on stage 5 and despite starting the final stage to Willunga Hill he was powerless to stop a rampaging Daryl Impey from winning his second Tour Down Under in as many years.

"I'm really looking forward to getting the 2020 season underway at the Santos Tour Down Under," Bevin declared in a press release issued by his team.

Crowdpleaser Bevin vows to return to Tour Down Under

"It was nice to win a stage last year, lead the race for the best part of the week, and come away with the points jersey. But, being so close to the overall win is always going to be a tough memory for me. I take confidence knowing I was close and I can be close again."

Bevin will have the support of a strong and experienced CCC Team as they go up against Mitchelton-Scott, Richie Porte and his Trek-Segafredo team, and Team Ineos and Rohan Dennis. The race once again concludes on Willunga Hill but there are several stages that will play into the hands of the potential GC contenders.

"I think we're in for a harder Tour Down Under this year but I really like the course. I'm happy that they have brought the Stirling finish back as I like that stage, it's a really hard one. Overall, I think it will be a tougher race and the battle for bonus seconds will be on from stage 1 but they will be harder to come by."

Sports director Jackson Stewart is confident that Bevin can be in the mix once again as the New Zealander targets the overall standings. Like Bevin, the sports director highlighted the stage to Stirling as a potentially pivotal day in the race.

"Looking at this year's race route, a major difference from last year's edition is the finish in Paracombe on stage 3. I think we could see the explosive climbers gain some valuable time and bonus seconds for the General Classification, as in the past. I expect the GC teams will take control of the race earlier with that deciding stage coming halfway through the race," Stewart said.

"We are bringing a strong and motivated roster to support Patrick Bevin, who showed what he is capable of in 2019. We started the season at the Tour Down Under better than many expected I think, and naturally we want to win a stage this year after last year's success. But, it's a new year and a new race. We have the motivation and confidence from last year's performance but, we expect a strong field and won’t be lining up as the favorites."