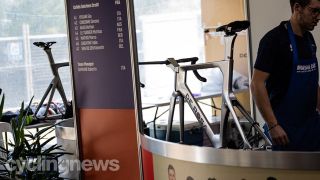 An as-yet-unreleased De Rosa track bike has been spotted in Adelaide in the week leading up to Tour Down Under, and with the 2020 Tokyo Olympics just a few months away, Cyclingnews understands it will be the bike Elia Viviani uses in his tilt for another Olympic Gold.

Viviani back in the saddle and preparing for 2020 with Cofidis

Viviani back on track and planning for the Tokyo Olympics

De Rosa Bikes, bike sponsor of Vivani's new team Cofidis Solutions Credits, made the step up to the WorldTour for the 2020 season, and while the Italian sprinter will be looking to defend the Omnium gold medal he won in 2016, but will still be expected to rack up a number of sprint wins as he tackles the Giro d'Italia and the Tour de France.

Looking at the UCI list of approved frames and forks, there look to be two recent additions, simply named Track1 and Track2. Judging by a recent tweet by Viviani, it looks as though he's been putting the bike through its paces for a few days.

Really good day at Politecnico Milano Wind Tunnel for some testing on the way to @Tokyo2020 💪 Now it’s time to fly to AUS for the @tourdownunder pic.twitter.com/uIdLhFeskZJanuary 11, 2020

Viviani's expected Madison partner for Tokyo, Simone Consonni is also in Adelaide for the Tour Down Under and the pair have just been confirmed to be racing The Advertiser Track Down Under II event on Friday evening, along with Deceuninck Quick-Step's Michael Mørkøv.

The Cofidis Solutions Credits mechanics had a third De Rosa track bike on hand for Fabio Sabatini, who is yet to be confirmed for the event on Friday.