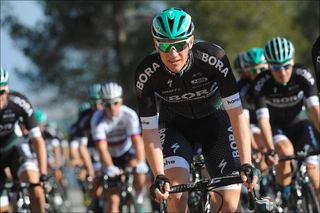 Irishman Sam Bennett will debut his new colours with Deceuninck-Quickstep in Australia in January, the Belgian squad announced on Monday.

While not specifically naming their team for Tour Down Under, Deceuninck-Quickstep listed Bennett among the seven riders to start two later events - the new Race Torquay on January 30 and the Cadel Evans Great Ocean Road Race on February 2.

Bennett, who moves to Deceuninck-Quickstep from Bora-Hansgrohe, will profit from a well-drilled lead-out team that includes Danish champion Michael Mørkøv, Iljo Keisse and Shane Archbold, who moved to the team along with Bennett.

The team did not name their squad for Tour Down Under, which begins on January 19 with the People's Classic criterium in Adelaide. The organisers will perform a safety assessment to ensure the courses, which are near some of the raging brushfires that have plagued the country this month.

Race Torquay, a new UCI 1.1-ranked event, is in a surfing town on Australia's southern coast far away from the fires. Its 13.3km-long rolling circuit which the peloton covers ten times should favour sprinters like Bennett.

The UCI WorldTour's first one-day event in 2020, the Cadel Evans Great Ocean Road Race, clocks in at 171.1 kilometres and boasts a hillier parcours. Deceuninck-Quickstep won the race in 2019 with Elia Viviani, who has since moved to the Cofidis team.

"We are really looking forward to these two races. Torquay is a new race, but we trained in the past in that area, so it’s not like it’s unknown to us. On paper, the up-and-down parcours shouldn’t be selective, as could very well be the case in the Cadel Evans Great Ocean Road Race, where both attackers and sprinters will have a strong chance of fighting for victory," sports director Rik Van Slycke said in a press release.