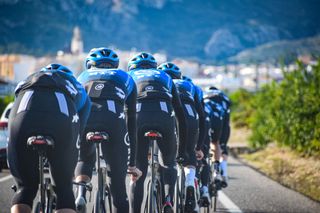 Giacomo Nizzolo and Ryan Gibbons will lead NTT Pro Cycling at the Tour Down Under, with stage wins being the main target for the new-look team.

Formerly Dimension Data, the South African team will be making their first appearance in the blue of NTT, the new title sponsor, two weeks after Bjarne Riis joined as team manager and bought a 30 per cent share in the organisation.

The six-stage race features uphill finishes at Paracombe and Willunga Hill on stages 3 and 6 and, while NTT don't have pretensions to the overall title, they are targeting stage wins through the week.

Nizzolo, the Italian sprinter, will target the bunch sprints on the flatter stages, while South African Gibbons, who is a more punchy sprinter, has options on the more selective days.

Gibbons placed 11th overall last year, after finishing 12th atop Willunga Hill, but the inclusion of two uphill finishes on this year's route makes a high GC finish more complicated this time around.

"I'm thoroughly looking forward to kicking off the season here in Australia. After a promising performance last year and another season of experience I’m excited to see what we can achieve in 2020," Gibbons said.

Two riders will make their professional debuts for NTT at the Tour Down Under: U23 world road race champion Samuele Battistella and 23-year-old Australian Dylan Sunderland. Rounding out the team are Rasmus Tiller, Stefan de Bod, and Danilo Wyss.

"We are excited to start the 2020 season and showing our new NTT Pro Cycling jersey in race action. We have been preparing well and will confront the Tour Down Under with eagerness but like every year it’s with an unknown factor of where we actually are compared to our opponents," said sport director Lars Michaelsen.

"The total of six stages will normally see four sprint finishes and here we will support our two fast riders Ryan Gibbons and Giacomo Nizzolo. For the two uphill finishes in Paracombe and on Willunga Hill we will know after the first two stages who of our NTT riders has the legs to handle them."

The 2020 Tour Down Under begins on Tuesday January 21.