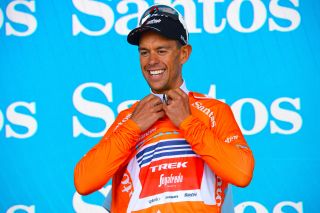 The battle for overall victory at the 2020 Tour Down Under continued to be a fight for time bonuses on stage 4 to Murray Bridge on Friday, with Daryl Impey (Mitchelton-Scott) collecting three precious seconds at the intermediate sprints to move to just three seconds down on race leader Richie Porte (Trek-Segafredo).

However, with the final stage on Sunday finishing on Willunga Hill, where Porte has won for the last six years, it is still advantage Porte with two days to race.

Impey can try to take more seconds on stage 5 to Victor Harbor on Saturday but Porte is the favourite to win the stage to Willunga Hill and take the 10-second stage winner's time bonus, and so seal overall victory.

Rohan Dennis: That was classic Richie Porte at the Tour Down Under

White predicts 'aggressive racing, crosswinds and more action' in Tour Down Under

Impey picked up two seconds in the early intermediate sprint, behind Jasper Philipsen (UAE Team Emirates) and Porte's Trek-Segafredo teammate Mads Pedersen. Philipsen won the second intermediate sprint as he fought to take control of the blue points jersey, but Impey was just behind him to take another two seconds. Porte does not have the speed or physique to fight in the sprints and so avoided losing any energy by staying on the wheels.

"We kind of excepted what was going to happen so we had guys up there to make it harder for him but all credit to Daryl he can mix it with the real sprinters," Porte said, knowing the Tour Down Under is going to be decided by seconds yet again, with Willunga Hill offering the final verdict.

"It's going to come down to the wire," Porte said, also warning about Saturday's fifth stage.

"Historically, there's been a bit of wind on this stage, but it's less tomorrow than today. It's another sketchy finish but there's a late hill so I think that will change the dynamics. After that, it's all down to Willunga."

Impey lost the blue points jersey to Philipsen after the young Belgian finished third on the stage, but he has his eyes on the bigger prize and the ochre-coloured leader's jersey. It's almost within touching distance.

"We'll keep trying and we'll give it our best shot. We did that today, the guys delivered me and we got three seconds. We would have liked more but that's how it goes."

Impey is chasing his third consecutive victory at the Tour Down Under. In 2018, he beat Porte thanks to better stage placings after they finished equal on time. Last year, he accumulated enough bonuses to beat Porte by 13 seconds. However, Porte has won on Willunga Hill on both occasions, and on the four previous occasions, winning the event overall in 2017.

"We're going to take every opportunity we get and take every second we can get, but you never know if it will be enough on Willunga. Just one second can be enough," Impey reminded reporters.

"In 2018, I finished in the same time as Richie, but if he wins the stage again this year, he'll take the 10-second time bonus and he'll the Tour. It's an uphill battle but we'll go for it."