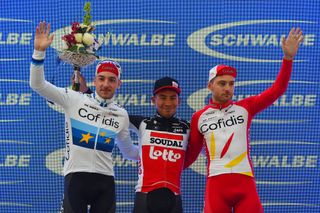 Lotto Soudal's Caleb Ewan stormed to what was his fourth win out of the last five editions of the Schwalbe Classic circuit race in Adelaide, South Australia, on Sunday evening. The Australian sprinter beat Elia Viviani and the Italian's Cofidis teammate Simone Consonni by around four bike lengths, setting himself up for what he hopes will be a successful Tour Down Under next week.

Between Tuesday and next Sunday, Ewan and his sprint rivals have up to four more opportunities to get their positioning and lead-out trains just right, and while Sunday's runner-up Viviani announced that he was extremely pleased with how his teammates worked to set him up, it's a case of round 1 to Ewan and his Lotto Soudal squad.

"I've been doing a lot of hard work the past few months, and wanted to keep the momentum of last year going here," Ewan explained to journalists after the podium ceremony, remembering a 2019 season that featured three stage victories at his debut Tour de France and two at the Giro d'Italia, as well as stages at the Tour of Turkey, the UAE Tour and the ZLM Tour, and victory at his last race of the year, the Brussels Cycling Classic.

"I took the decision to stay with my family a bit longer and just train at the start of this year, instead of doing the Bay Crits and the National Championships," he said. "It worked for tonight, and I hope it can keep working into the Tour Down Under.

"I know that doing the Bay Crits and Nationals can work for me, as I've done them before. But last year I trained a lot and then did the Bay Crits and Nationals, but then came away with no wins after the Tour Down Under, so after that I had a bit of a re-think. Did I really want to start my season in Australia so full gas, as I think it affects you later in the year, or did I want to try to sort of relax into it and see how it goes because it is a long season?

"It's especially different now that I have to be trying to hit targets for July, which I didn't have to do before," he said, referring to making that Tour de France debut with what was a new team in Lotto Soudal last season, having never been selected for the Tour by previous team Mitchelton-Scott. "It's becoming a long year, and it's a little bit hard to peak now, and to keep peaking for the season.

"I've only done five race days since last year's Tour," he added. "I was a little bit nervous coming into today as you never know how your legs are going to be after having had so much time off racing. I think I've had, like, five months off racing, so I'm happy with where my form's at."

The only slight hiccup in what was otherwise a nigh-on perfect demonstration of sprinting in front of an enthusiastic home crowd came just before Ewan opened up his final, successful run to the line.

"I didn't actually know what [lead-out man] Roger Kluge was doing as he let a wheel go, and so I had to make the decision to jump around him. After the race he told me that he left the gap to then kind of try to launch me, but at the time I wasn't willing to wait around and see what he was going to do," the Australian laughed, "so I had to just jump myself."

For well over the first half of Sunday's 30-lap, 51km race, Ewan had kept himself to himself as more or less the last man in the bunch, only moving up as the pace increased towards the end of the race, before shooting out of the front of the peloton in the final straight to take what was a relatively easy victory.

"I sit at the back here every year here, actually," Ewan explained. "I sit at the back of the bunch and just cruise. If you're at the back, you can really let the wheels go and take your own lines through the corners instead of braking so much. I think I actually saved a lot of energy, and if it's ever too hard at the back, then you can always move up.

"It did get a little bit slippery when the rain started coming down, but I think that can be the same on most circuits. If there are painted lines on the road, it's always going to be a little slippery, but that means you just have to go a bit slower."