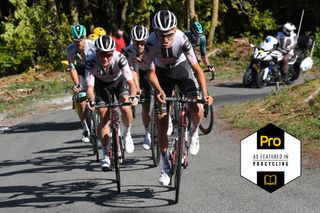 When Michael Matthews was left out of the Tour de France by Team Sunweb, questions were asked of the German team, especially since their stated aim was to go for stage wins. To leave out a former green jersey winner seemed like an oversight, and since then Matthews confirmed he’s leaving the team altogether, heading back to Mitchelton-Scott next season.

But Sunweb’s Tour team, with an average age of 26 (slightly pulled in one direction by Nicolas Roche’s 36 years), has performed excellently. Roche is the only Sunweb rider over the age of 28, and only he and Nikias Arndt had won a Grand Tour stage before this year’s Tour de France.

None have won at La Grande Boucle before. It brings to mind Alan Hansen’s famous line about Manchester United in 1995: “You can’t win anything with kids”. Hansen was proved wrong, and Sunweb’s doubters have been proved wrong, too.

It took until stage 12 for Sunweb to open their account, when the brilliant Marc Hirschi soloed to victory after a fantastic team display, which saw three Sunweb riders in the top 10. Søren Kragh Andersen went on to finish in third, with Roche in 10th.

Julian Alaphilippe: No regrets, Hirschi was the strongest today

Hirschi: I didn't believe I could win until the last kilometre

For Hirschi, it gave him a win at the third time of trying, having already stood on the podium in the Tour after finishing second behind Julian Alaphilippe on stage 2, and heartbreakingly third on stage 9 in Laruns, after a 90km breakaway – most of it solo – that saw him caught by an elite group of GC favourites and beaten in the sprint for the line.

Hirschi is a former under-23 world champion, and at 22 he has now won his first professional victory in his second year in the WorldTour. He’s also a product of the Sunweb Development Team, and fittingly capped off a win that came about largely through the team’s efforts and tactics.

With 43km to go, Tiesj Benoot and Kragh Andersen attacked off the front of the peloton, with Hirschi following. Benoot, not a bad shout for a stage win himself, burnt himself out in order to put distance between them and everyone behind, as Kragh Andersen continued to power on. In the group of six, Sunweb made their numerical superiority count, laying the stage for Hirschi to attack on the Suc au May, with 25km to go, perfectly.

A chase group of 14 formed, featuring Kragh Andersen, Roche and the favourite for the day, Alaphilippe. Fourteen riders should be able to catch one, but the lack of cohesion in the group played straight into Hirschi’s hands. Alaphilippe’s lieutenant Dries Devenyns was left to drive the group, and when that failed to make headway everyone turned on each other instead of working together.

Alaphilippe looked desperate in his attempts to bridge the gap up to the Swiss rider, while Hirschi remained cool, calm and collected, time-trialling his way to the finish. Instead of combining their collective power, the chasers repeatedly attacked, upsetting the rhythm, constantly stopping and starting, and failing to make any real impact on the chase. Kragh Andersen and Roche could also simply sit in, acting as dead weight, before Kragh Andersen was able to roll off the front to complete the podium.

As he did on stage 9, Hirschi descended incredibly well, using every bit of tarmac to extend his advantage to the line. On stage 2, Alaphilippe beat him to the line in Nice. This time, Hirschi had learned in his second battle with the Frenchman.

Just as important as Hirschi’s nous and racing skills was Sunweb’s team effort. On Eurosport, Brian Smith, who used to manage the MTN-Qhubeka squad, labelled the team’s plan a “masterclass”. Smith said: “They’ve ridden in numbers, and attacked at the right time. They’ve come here with the tactics and the mind to win every day, and it has really worked for them.”

It was not the first time that Sunweb has looked strong in the Tour this year. They’ve featured in multiple breakaways, and have come close to a win on multiple occasions. Roche instigated the big escape on stage 6, and the Irishman, Hirschi, and Benoot have all spent over 100km in breakaways at this year’s Tour so far, with the inevitable big breaks in the Alps still to come.

In sprint finishes, the team has been prominent too. In fact, often they’re the only team to have a recognisable lead-out train working for their sole sprinter, Cees Bol. Bol might not have won yet, but he’s finished in the top 10 four times, and could have won on stage 5 in Privas, if it wasn’t for a monumental effort from Wout van Aert – potentially the best rider in the world at the moment.

Sunweb’s tactics are also not a one-off. Earlier this year at Paris-Nice, the team were the aggressors, none more so than on stage 6 where Benoot won, after countering an attack by Kragh Andersen. Matthews followed him into second to make it a one-two, before Benoot struck out alone again the next day in a bid to win the yellow jersey, falling narrowly short.

A lot of credit has to go to the team’s coaches, which includes Matt Winston, who cut his teeth at British Cycling and One Pro Cycling. The team has a plan for every day, and it shows.

Now Sunweb have won and accomplished their goal at this year’s Tour, one imagines that it might take the weight off their shoulders and allow them to continue to be aggressive and hunt more stages across the remaining nine days. With a competitive team, and a star in Marc Hirschi, you wouldn’t bet against at least one more Sunweb win.