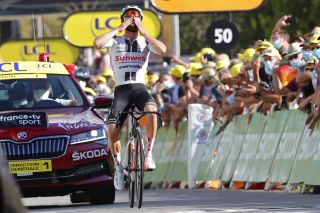 In September two years ago, Marc Hirschi (Team Sunweb) soloed to victory ahead of the late Bjorg Lambrecht of Belgium and Finland’s Jaakko Hanninen in the World Championships under-23 road race. 24 months later, the young Swiss rider has clinched his first professional win, again alone, and this time at the Tour de France.

Hirschi's latest solo success was arguably all the sweeter after two near-misses in the first half of the Tour.

He claimed second in Nice behind Julian Alaphilippe on the Tour's opening weekend after he went clear with the Frenchman and Adam Yates on the Col des Quatre Chemins. Hirschi then placed third in Laruns seven days later after his 90km solo move was swept up by Tadej Pogacar, Primoz Roglic, Egan Bernal and Mikel Landa almost within sight of the finish.

This time, though, there were no such last minute let-downs, as Hirschi powered triumphantly across the finish line in Sarran at the culmination of a gutsy 40km breakaway through the Ardennes-like hills of the wild Corrèze countryside, having covered the last 23km alone.

"It's unbelievable because I was two times close. Today I never believed I could make it because it was really doubtful. I went full gas to the last few hundred metres. It's super nice - I can't describe it, it's hard to find words," Hirschi said afterwards.

"I didn't believe until I could make it until the last kilometre: that makes it really special. I was really sad after Sunday, coming so close, but in that last kilometre, I could only be thankful to the people that always believed in me, I was full of emotions."

Hirschi's teammate Søren Kragh Andersen took third on the stage and waved his right arm to celebrate Hirschi's victory, an appropriate reminder as to how well his Sunweb squad had worked together to ensure that the Swiss racer was ideally placed to go for the win.

Tiesj Benoot and Anderson were instrumental in driving ahead on the Suc Au May second category climb to shred Hirschi's rivals before he went clear, and then Nicolas Roche did sterling work as guard dog in the chasing group spearheaded by a very restless Alaphilippe.

But it was Hirschi himself who managed to shed his two most persistent chasers, Max Schachmann (Bora-hansgrohe) and Marc Soler (Movistar), and he then used his notable descending skills, not without taking some risks on a few corners, to prise open a bigger gap than the 20 seconds he had at the summit of the Suc Au May.

"The team spirit is really good, we talk a lot to each other about our strategies every day, and that helps us win," Hirschi said afterwards. "I'd wanted to be in the early breakaway, but then we waited for the last climb, my teammates made it hard and then I just went."

Apart from it feeling strongly like sporting justice after two near misses, Hirschi's win ended a longstanding drought on success for Switzerland at the Tour de France. It's been eight years since the country's last win in the race, which came when Fabian Cancellara landed the prologue time trial in Liège in 2012.

Hirschi said that he has been able to draw on the now retired star's experience and advice. Cancellara is a fellow Bern native and his agent. "He's helped me as a rider and as a person," he said. "We're in pretty close contact."

Hirschi was uncertain, he said, as to whether he would end up replacing Tom Dumoulin and the soon-to-depart Michael Matthews as an outright team leader in Sunweb, but nor did he rule it out.

He also didn't dismiss his chances of taking more stage wins between here and Paris. But if some riders are cagey about revealing to the world at large which of the upcoming stages they think might favour them, Hirschi simply said that he didn't know.

"I haven't looked at other stages, I just take it on the day by day," he concluded. "I like to open the book and see what the stage is, and I'll keep doing the same. I will decide every morning."

Given his well-deserved win at Sarran, that strategy certainly seems to be working.