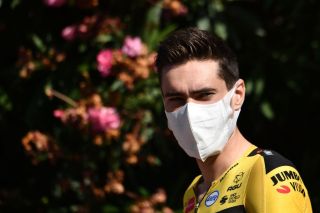 In a word, Tom Dumoulin said, it was 'stupid.' The Dutch Jumbo-Visma rider was a faller on the final ascent of the Col des Quatre Chemins on stage 2 of the Tour de France, but he could afford to laugh it off after reaching the Promenade des Anglais safely among his fellow overall contenders. One day less.

The sodden opening stage of the Tour on Saturday had been pockmarked by a spate of crashes on sinuous and greasy descents, but the Jumbo-Visma man’s fall here came on a dry, wide and uphill stretch of road with 12km remaining, shortly after Julian Alaphilippe (Deuceninck-QuickStep) had triggered the day’s winning move. He immediately remounted and rejoined the reduced peloton, coming home alongside teammate Primož Roglič and Ineos Grenadier's Egan Bernal et al, 2 seconds down on the stage winner Alaphilippe, who also took the maillot jaune.

“Stupid,” Dumoulin told NOS when asked to describe his crash after the stage. "I don't really know exactly what happened. I looked to the left for a moment, and maybe I swerved a bit to the right because of that. Then [Michal] Kwiatkowski came by and he knocked my handlebars out of my hands.”

Tom Dumoulin's arguments against MPCC are not reasonable, says Legeay

Kwiatkowski raised an arm in apology as soon as he saw what had happened. Dumoulin was already on the ground by then, but he was swiftly back on his bike and he was back aboard the group of general classification grandees long before they crested the summit of the Col des Quatre Chemins.

He reported no injuries save a bump to his right knee and he was keen to stress that he did not anticipate any lingering effects – mindful, no doubt, of how the state of his other knee had so dominated Dutch headlines in the months after the crash that ended his 2019 season prematurely.

“Luckily, I didn't really hurt myself,” Dumoulin said. “I bumped my knee a little, but I think it's OK. My right knee hurts the most, but I think it will loosen out. Let's not blow it up.”

Sunday’s stage brought the Tour into the Alpes-Maritimes with the ascents of the Col de la Colmiane and Col de Turini, with Jumbo-Visma’s yellow and black jerseys positioned at the front on the second climb. They were still at the head of affairs on the Col d’Èze, where Robert Gesink’s brisk pace-making served to deter any attacks, but Jumbo-Visma were not as prominent on the final ascent of the Col des Quatre Chemins, where Alaphilippe, Marc Hirschi (Sunweb) and Adam Yates (Mitchelton-Scott) had the wherewithal to escape and stay away from a reduced bunch of 30 or so riders.

In the overall standings, Dumoulin and Roglic sit 10th and 11th overall, 17 seconds down on Alaphilippe and level on time with men like Bernal and Thibaut Pinot.

“Primoz and I are just where we should be. For us it wasn't the weekend to attack and we got through it relatively safely,” Dumoulin told Sporza, though he suggested that his team might not be as eager to patrol the head of the peloton in the days ahead.

“We have to be careful not to carry the weight of the whole race from day one,” Dumoulin said. “We did that this weekend, but it also kept us out of trouble. It was a great weekend for us.”