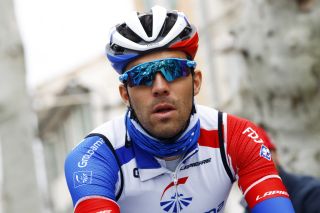 "I had the first symptoms at the end of last week," Régis Pinot told France Bleu. "I was in pain, I started to cough. Then the fever came. And today, it is more respiratory problems."

Régis Pinot's positive test was confirmed Wednesday after he provided a sample two days earlier. He is currently confined to his home way from his family, including Thibaut.

"Thibaut is fine for now," Régis Pinot said. "I saw him behind the window last night because I don't want to let him approach. I don't want my kids to approach me while I'm contagious."

Régis Pinot, 58, is director of a funeral home and believes he contracted the virus through his work there. Although Régis Pinot said he is confident he will fully recover, he was angry at the French government, which he said had failed the people.

"I think we made mistakes and that we will draw the consequences afterwards," he said. "I'm disappointed in the French system."

He argued that French authorities failed to adequately anticipate the pandemic.

"My wife is a nurse and it has been months since the nursing staff sounded the alarm, and we did not take it seriously," he said. "However, what's more important than health?"

As to his son's stalled racing season and the prospect of running a Tour de France in July, the mayor of Mélisey in Haute-Saône said that out of fairness the Grand Boucle should be postponed at the every least.

"Otherwise there will be inequalities," he said. "There are countries where you have the right to train and others not. We will have to give everyone at least a month before resuming competitions so that they can get back on track."