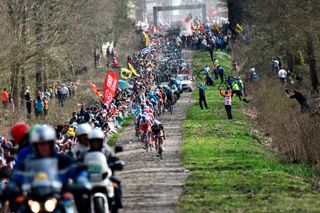 The postponement of the Tokyo Olympic Games has freed up space in the summer for some of the spring races shelved due to the coronavirus pandemic, but creating a new post-Covid-19 coronavirus race calendar appears as complicated as a 1,000-piece jigsaw puzzle.

The pieces all have specific needs and impact each other chronologically, economically and physiologically. The longer the lockdown on races goes on, the shorter the window to redesign the 2020 cycling season.

Cyclingnews has gathered as much information as possible from sources, studied other news sources and tried to understand the needs of the riders, teams, race organisers and fans, to draw up a possible post-Covid-19 men's WorldTour race calendar. We will soon do the same for the Women's WorldTour.

Belgium extends road season but a 2020 Tour of Flanders 'unlikely'

It seems vital for the sport that the Tour de France goes ahead sometime in the summer, with other Grand Tours following and other races fitting in around them. The European Road Race Championships (Sept 9-13) in Trento, Italy, and the Road Race World Championships (Sept 20-27) in Aigle-Martigny, Switzerland both seem unmovable, with both the UEC and the UCI dependent on the revenue generated by the events.

Shorter stage races and the Spring Classics can become a unique summer and autumn campaign, with riders perhaps migrating from Northern Europe to Italy and Spain to race in the best possible weather conditions. The Giro d'Italia could be held in October, after the World Championships (September 23-27). The Tour of Flanders and Paris-Roubaix could be held in the summer, with Strade Bianche, Milan-San Remo and Il Lombardia late in October.

Of course, general public health and the ongoing fight around the world against Covid-19 are far more important than a bike race and so any return to racing can only happen when nations and continents have managed to control the spread of the virus and have returned to normal daily life.

Even if the UCI agrees to give a race a new date in the calendar, there are myriad Covid-19 related factors that are all possible obstacles. Can the race go forward safely and not contribute to the spread of the virus in any way? Will the public, riders, and race staff be safe and protected? What happens if someone on the race tests positive for the virus during the race? Will it and the other races then be cancelled? Will riders and teams need to go into quarantine before racing if they travel to Europe from the rest of the world?

It also seems right to ask if it is socially acceptable to even try to put on a bike race during such a dramatic moment for humanity. There may be little interest in a bike race even as the impact of Covid-19 finally eases.

The UCI has made it clear it has been speaking to the different stakeholders of the sport: the race organisers, the teams, and the riders, with each organisation holding its own conference calls. According to La Gazzetta dello Sport, the UCI is due to hold the next stakeholders' conference call on Wednesday, April 1.

When commenting on the postponement of the Tokyo Olympic Games, the UCI said: "Strong measures must be taken for the resumption, enabling a progressive return to training and competition for the riders while respecting their health and sporting equity. The UCI, together with its partners, will move forward united in the interests of cycling."

The UCI also specified that "priority will be given to events on the calendar at the date of the resumption" and "with regards to the men’s calendar, depending on the space available and taking into consideration the possibility of overlapping, to the three Grand Tours and cycling’s Monuments."

All races in April have been cancelled or postponed, with the Giro d'Italia (May 9-31) postponed and many other races in May already making similar decisions. The Critérium du Dauphiné (May 31-June 7) and the Tour de Suisse (June 7-14) remain on the calendar but are surely at risk, as is the Tour de France on its early date of June 27-July 19.

Perhaps the Grand Boucle can be moved back several weeks into late July and early August, giving France time to recover and riders time to train and race the Tour de Pologne or elsewhere first.

The CEO of RCS Sport, Paolo Bellino, last week suggested the Giro d'Italia could help showcase Italy to the world after it emerges first from a Covid-19 lockdown. Italy celebrates becoming a democratic republic each June 2 and it appeared to be a symbolic date to start the Corsa Rosa. However, considering the current data on the spread of Covid-19, the time needed for Italy to make any kind of return to normality, plus the aspects detailed above, the Giro d'Italia in June seems very unlikely. An October date seems fare more logical.

The Vuelta a España can perhaps be held as planned between August 14- September 6, with the Classics on the weekends of late July and August, depending on the dates of the Tour de France. Teams have already indicated they would be happy to run triple race programmes, spreading riders across the Grand Tours and Classics campaigns. The WorldTour teams could be exempt from having to ride all the major WorldTour races, freeing up space for other ProTeams to step up.

A Classics season could start with the Clasica San Sebastian on July 25 and run until the Bretagne Classic already scheduled for August 23 or even beyond, until the GP Cycliste de Quebec and GP Cycliste de Montreal on September 11 and Sept 13. Milan-San Remo could be included in the Classics block, with the hilly Ardennes Classics at the end to help riders prepare for the World Championships.

The European Road Race Championships are scheduled for Sept 9-13 in Trento, Italy, with the men's road race on Sunday, September 13.

The UCI Road World Championships in Aigle-Martigny, Switzerland are scheduled for a week later between Sept 20-27, with the men's time trial on September 20 and the men's road race on September 27.