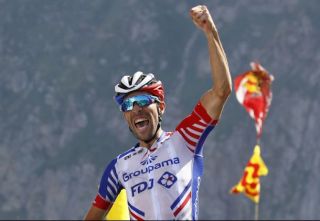 Groupama-FDJ's Thibaut Pinot will begin his winter training again in November, recovered physically, if not entirely mentally, from the thigh injury that forced him to quit this year's Tour de France while in a position to potentially win it.

In a wide-ranging interview with French sports newspaper L'Equipe on Monday, ahead of Tuesday's unveiling in Paris of the 2020 Tour de France route, Pinot described how he'd found it hard to even look at his road bike in the aftermath of what had happened, preferring instead to train on his mountain bike.

The Frenchman had been in fifth place overall, 1:50 down on then race leader and compatriot Julian Alaphilippe (Deceuninck-QuickStep), but just 20 seconds behind eventual race winner Egan Bernal (Team Ineos), who took the race lead as Alaphilippe faded on the next day's shortened 19th stage.

The images of Pinot in tears, having had to quit the race on the same stage, were beamed around the world but, now recovered, Pinot is looking ahead to 2020 to try to banish the bad memory of what could have been.

"I preferred to go mountain biking, as I didn't want to look at my road bike'

Pinot announced in early September that he wouldn't race again in 2019, which meant that he wasn't able to defend his crown at Il Lombardia last weekend. He told L'Equipe that he's been doing some running in recent weeks, but that he's generally resting until early November, when he'll begin his winter training in preparation for next season.

"I didn't ride my bike for three weeks after the Tour, but then I trained for about a month and a half, with a lot of mountain biking – for maybe three quarters of my training, as I knew that I wasn't going to race again this season," he said.

"I preferred to go mountain biking, as I didn't really want to look at my road bike each morning. I was a bit angry with myself, about everything that happened," Pinot said. "It was my body that let me down [at the Tour], so I blamed myself for the injury."

In terms of how his thigh injury was actually caused, Pinot admitted that he and his doctors were none the wiser.

"It's still a bit of a mystery," he said. "I would have liked to have known what caused it, but we still don't know, and that's frustrating. The doctors simply told me that it was like a footballer's injury – the type of injury you might get during a match – so it's strange to have had it at the Tour."

'I had put all my energy into the Tour'

Mystery aside, Pinot said that it's been the mental side of having dropped out of the Tour when on course to have become the first French rider to win the race since 1985 winner Bernard Hinault that has been the most difficult aspect to try to get over.

"It's been really difficult, mentally, because since winning Il Lombardia in 2018, I had put all my energy into the Tour," he said. "There wasn't a single training session in which I didn't think about it, so when it suddenly all came crashing down, it was very hard to accept.

"We were entering the final three days in the mountains, which I had been waiting for all along. I knew that the Tour was going to be decided there," said Pinot.

He told L'Equipe that he wasn't surprised at the level he found himself at at this year's race, but is now very eager to return to the race to see if he can re-enact the kind of form that saw him win stage 14 on the Col du Tourmalet.

"Whatever happens, happens," he said. "It wasn't like anyone died, or anything. I'll just keep doing what I can do."