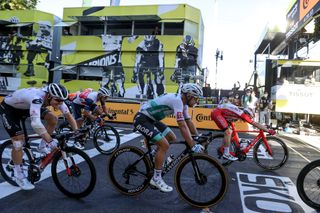 Bora-Hansgrohe’s Peter Sagan crosses the line for fourth place on stage 14 of the 2020 Tour de France, taking more points in his chase for the green jersey (Image credit: Bettini Photo)

The pressure put on by Peter Sagan's Bora-Hansgrohe team to successfully drop green jersey leader Sam Bennett (Deceuninck-QuickStep) during stage 14 of the Tour de France on Saturday meant that the Irishman's lead in the competition has now been cut to 43 points with a week to go until the finish of the race in Paris – although Sagan had hoped to cut the deficit by even more.

While Groupama-FDJ's Stefan Küng questioned Bora-Hansgrohe's tactics when Sagan could 'only' finish fourth at the end of the day, the Slovakian nevertheless picked up a further 33 points towards the green jersey, and Bennett can expect to come under similar pressure in the coming week, meaning that the points title could, as four-time winner Sean Kelly predicts, come down to the final sprint on the Champs-Elysées.

"We wanted to make the stage tough today and drop the sprinters," Sagan said afterwards on his team's website. "We worked hard all day for that, until the finish.

"I took fourth and got more points in the fight for the green jersey. The goal was to take more, but in the end, that was the best we could do," he said, with Sunweb's Søren Kragh Andersen having clipped away to take a solo stage victory.

"This is a very hard Tour de France, and I'd like to thank my teammates for their fantastic job, not only today, but every day since the start in Nice," said Sagan.

"Of course, our goal was to get more than 23 points back," explained Bora-Hansgrohe teammate Lennard Kämna, with Bennett still having been able to take 10 more points at the intermediate sprint before being dropped. "We rode a strong race again, but in the finale we lacked one extra rider to control the race.

"Still, even one rider more wouldn't have been enough, but our chances in controlling could have been a lot higher," he said. "Without that additional rider, it was an open race with lots of attacks. I pulled to catch one rider that attacked, and when I saw the gap, I gave it a go. This wasn't planned, but it felt quite good to be at the front on that last climb with lots of spectators."

"Peter was with Max [Schachmann] at the top, and kept on and took some initial points [15 points, while Bennett took 10]. Later on, on the second, long climb, our aim was to drop all the sprinters," he said, referring to the Col de Béal. "That also worked out very well; the squad did an amazing job."

However, a later puncture for Lukas Pöstlberger left the team the 'man down' that Kämna mentioned, making it that bit more difficult for Bora to finish off their plans.

"We missed Lukas' contribution there," said Poitschke. "We continued and worked until the finish, but it was hard to control the race in the last kilometres, and that was why a rider [Andersen] was able to escape and take the win.

"Peter was at times blocked and finished fourth. Again, the whole team did an amazing job. Thanks to all our riders – it was a very good stage," he said.