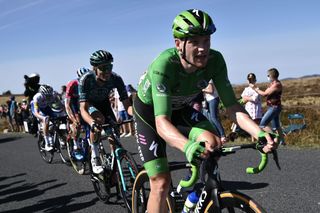 Say what you will about Peter Sagan and his sprinting legs but the three-time world champion continues to throw everything into the defence of his green jersey title at this year's Tour de France.

On stage 14 to Lyon, the Bora-Hansgrohe rider took what should have been a day for the break and made it – or at least most of it – all about the points classification. Coming into the stage, he trailed Sam Bennett (Deceuninck-Quickstep) by 63 points for the points lead. He then reduced the deficit at the intermediate sprint by five points, and pulled back a further 18 courtesy of a fourth place on the finish line, and Bennett’s lead was down to 43 points.

Bennett initially tried to follow on the first climb of the Côte du château d'Aulteribe when Sagan and his team upped the pace, but the Irishman relented towards the summit with Sagan picking off 15 points at the intermediate sprint that soon followed, behind the early break of Stefan Küng (Groupama-FDJ) and Edward Theuns (Trek-Segafredo).

On the Col du Béal, the Bora team accelerated once more, and near the summit of the second-category climb Bennett was dropped. The gap hovered at roughly 30 seconds but with a short descent before the climb of the Côte de Courreau, the Irishman and his teammates that were pacing him began to lose ground. With 80km to go on the stage they sat up, with Bennett eventually drifted over the line in 106th place, and nearly 20 minutes down on the front group.

The time gap was irrelevant, but Sagan managed to pick up further points as he finished fourth, 15 seconds behind stage winner Søren Kragh Andersen. For Bennett, it was another tough stage in the Tour de France, and with Sagan willing the chase for every single point available, the fight for the green jersey could go down to the wire.

"It was a hard day,” Bennett said in the mix zone after the stage. “I still had a much better day than yesterday, sensation-wise. Yesterday I was dead; this morning I was a new man.

"In the first intermediate sprint, I saw what Bora was doing, trying to harm me, so I let them go… But, later on, I missed one last kilometre on the long climb and there I lost my chance. Today didn’t take a lot out of me, I feel well after all.

"And of course I want to thank my teammates for the excellent job they did today, as always. I am in better shape than yesterday. I was afraid I might not come back from yesterday’s effort, because when you go too deep on a Tour de France stage you normally end up paying for it… But today I am a new man. I hope tomorrow it’s an easier day," said Bennett.

Luckily for Bennett, stage 15 - while it ends in a summit finish - sees the race’s intermediate sprint come after 58km of rolling terrain. If and when Sagan goes on the offensive, the Irishman, who is the faster of the two, should be able to hold his own.