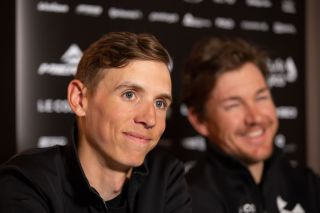 Bahrain McLaren's Dylan Teuns will restart his season at Strade Bianche on August 1 ahead of assuming a support role for Mikel Landa at the Tour de France and targeting the rainbow jersey for Belgium at the World Championships road race at the end of September.

"My role will be slightly different compared to last year. The team has big ambitions for the Tour with Mikel Landa and Wout Poels, so I will have to ride more in their service," Teuns said on Monday, ready to play a more defined role when the race starts in Nice on August 29, without the level of freedom he enjoyed in 2019, when he rode to victory on the stage to La Planche des Belles Filles.

"Together with Damiano Caruso and Pello Bilbao, we can divide the work in the mountains," he told Sporza from his team's altitude training camp in Andorra.

Teuns will then quickly change roles to be one of the leaders on the Belgian national squad for the World Championship road race in Switzerland on September 27 – just a week after the finish of the Tour in Paris.

"With a view to the Classics and the World Championships, it'll be important not to come out of the Tour completely empty," Teuns said. "I'd already talked about targeting the Worlds during the off-season, and nothing's changed in that respect. Performing well at the Worlds would be nice compensation for riding in a support role at the Tour. That's my main goal this autumn."

Teuns had already managed 16 race days this season ahead of the sport's shutdown due to the COVID-19 pandemic, taking part in the Volta a la Comunitat Valenciana, the Omloop Het Nieuwsblad and Paris-Nice, as well as winning the time trial stage at the Ruta del Sol in February.

He'll restart his season at Strade Bianche on August 1, and hopes to hit the ground running in an event he believes should suit him.

"It's a difficult course, but the riders who've already won there in the past are similar riders to me. I hope my legs will feel good, and, if they do, I'll certainly not hide," said Teuns.

"It is a bit difficult to estimate your own level. I'd compare it a bit with the start of the season, when you always have to wait and see where you stand compared to the competition," he said.

Perhaps just as pressing as the racing is Teuns' destination for next season, with his contract with Bahrain McLaren set to finish at the end of this year following two seasons with the WorldTour team.

"I think Bahrain will certainly still have a team next year," Teuns said, referring to team partner McLaren's difficult position. The car manufacturer and Formula 1 team backer has been left reconsidering its support of the cycling team following the loss of 1,200 jobs at its UK base earlier this spring due to the coronavirus pandemic.

"There is certainly still a future in that team," he said, referring to both its survival and his chances of remaining there. "I'd like to tie things up in the coming weeks. I'm very ambitious, and it's nice to have interest from other teams, but my current team is also still in the running."