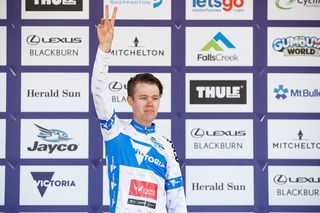 When he attacked relentlessly in the final kilometres of the climb up to Falls Creek to take third place on stage 2 of the 2020 Herald Sun Tour on Thursday, St George Continental's Sebastian Berwick hoped that the WorldTour teams at the race, and around the world, might be looking at him. When he did it again, on the summit finish to stage 4 on Saturday at Mount Buller, taking second on the stage and moving up to second overall, they surely were.

"I really want to get to the WorldTour – to the top of cycling," Berwick told reporters as he waited to receive another white jersey as the race's best young rider, still breathless from his immense effort of having attacked with a kilometre to go, before just missing out on the stage victory to race leader Jai Hindley (Sunweb).

"That's the dream – to be able to make a living out of the sport. I couldn't think of anything better than that to do with my life, to be honest. Hopefully, people will see this and go, 'Shit – maybe he's all right at riding bikes,'" he said.

Berwick's St George Continental team is a domestic Australian team competing at this year's Herald Sun Tour alongside a number of other domestic squads, but also – in Sunweb, Mitchelton-Scott, EF Pro Cycling and Israel Start-Up Nation – four WorldTour outfits, fielding some of their best riders.

For the 20-year-old Berwick to perform on such a stage, where top sports directors and managers are no doubt keeping an eye out for the next big thing, it's surely only a matter of time before Berwick is fielding expressions of interest.

'If they can hold on, good on them'

Berwick went into stage 4 from Mansfield to Mount Buller in third place overall, with a six-second deficit to race leader Hindley, but just two seconds down on second-placed Damien Howson of Mitchelton-Scott.

"[St George sports director] Dave Sanders and I, we did this bloody last kilometre-and-a-half four times in the car after dinner yesterday," revealed Berwick. "He was hyping me up for that last bit, saying, 'If you've got anything, just go now, matey.'

"With a kilometre-and-a-half to go on the stage, I was thinking, 'Maybe I should go now – it's still a big group.' Then going around that bend with a kilometre to go, I just thought, 'Let's go, and if they can hold on, good on them. If I win, then, shit, that's great.'"

The attack was certainly vicious and only Hindley could follow him, but Berwick missed out to the Sunweb rider on the line.

"I knew I had it in me coming into that last kilometre-and-a-half. I didn’t back my sprint, so I just went from a kilometre out and tried to get a gap on at least Damien [Howson], but Hindley can deliver the goods when he needs to.

"I'm pretty happy with that," Berwick continued. "The team rode well all day – they helped me get out of the wind, and kept me up at the front, and then in the perfect position on the climb. I just had to finish. What did have to do? Thirty minutes' effort – that's all. I'm just so happy for me, and for the team. It's a great result."

"When I was straight out of school, I went to Europe for a whole year, with the AG2R development team," explained Berwick of his path so far, adding that he's from a cycling family with a father and grandfather who both raced at a high level, and that he started racing himself at the age of 13. "So I was always into cycling. It was always in my vision in some way, whether I realised it or not.

"And then last year, joining St George, was the best decision I've made, I reckon. It's such a good atmosphere. The guys are just so positive, and I’m just so happy to give them the result they deserved," he said.

"I told the guys at the end of last year that if they just gave me a bit of rest, I'd come back for this first half of the season flying and get them some good results," said Berwick. "I've proven that I can, and am just happy to be able to give back to the team for all the work they've put into me.

"There will be plenty of hype tonight, and tomorrow night is going to be good," he laughed, predicting a well-earned celebration in Melbourne after the fifth and final stage around the Royal Botanic Gardens on Sunday afternoon, which should be one for the sprinters.