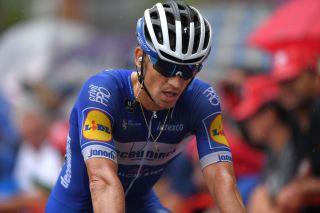 Zdenek Stybar has three rainbow jerseys in his wardrobe from his cyclo-cross career, but the Road World Championships have never proved as felicitous for the Czech rider. Despite his aptitude across a variety of terrains, Stybar’s best showing from seven appearances, dating back to his debut in Valkenburg in 2012, is his 14th place in Bergen two years ago. It seems an anomaly.

“Somehow it’s never really worked out for me in the Worlds,” Stybar told Cyclingnews at the Vuelta a España, where he is completing his build-up to this year’s Worlds in Yorkshire.

“Always in the past when I did cyclo-cross, the Worlds were the best races I did in the year. So far, on the road, it just hasn’t worked out yet, but I hope this year I will change that finally.”

Stybar will aim to improve his Worlds record on a course in Yorkshire that defies precise definition, but the very vagueness of its trade description – long and tough – suggests that a rider capable of winning any kind of Classic has a chance of shining on September 29.

Winner of Omloop Het Nieuwsblad and the E3 BinckBank Classic already this season, Stybar will travel to Yorkshire with optimism, having reconnoitred the parcours when he visited Britain for the RideLondon Classic this summer.

“I went there on the Friday before London, and I did all the race, so I know the parcours. I put some time into it,” Stybar said.

“I think that it will be really challenging. It suits riders for the Ardennes Classics and the cobbled Classics and guys who are not afraid to attack from far – I think a lot of guys have a big chance this year. It can come even to a sprint from a small group. It can turn out in a lot of different ways.

“It will be a really interesting race, because you can’t say how it will develop. It will be, first of all, a really long race and probably not in the best weather conditions, and then the local laps will be really fast. The guys who control the race there will have some advantage, but that will only be the big nations.”

Stybar is currently in action at the Vuelta a España, which was once a seemingly de rigueur rite of passage for men with Worlds ambitions. In recent seasons, races like the Grands Prix of Quebec and Montreal and the Tour of Britain have ensured that Worlds contenders follow a variety of paths to the day of days, but Stybar – like his trade teammate Philippe Gilbert, winner in Bilbao on Thursday – is content to hone his form on Spanish roads.

“For me, the Vuelta will be the best preparation for Yorkshire because it’s so hard here,” Stybar said. “The stages are longer than they used to be, I think everything is on track.”

All year long, Stybar plies his trade on a Deceuninck-QuickStep team who invariably dictate the terms of engagement in major one-day nations. At the Worlds, by contrast, Stybar will ride on a Czech team that will not set out with a full complement of riders, in contrast to powers like Belgium and Italy.

“It’s of course some disadvantage but I think on every World Championship we have done in the past with the national team, we’ve done the best we could,” Stybar said.

“Last year, we supported Roman Kreuziger and he managed to be sixth. We have strong riders, but you still can’t compare us to nations like Italy and Belgium, because they will have more riders on the start line.”

Every disadvantage has its advantage, of course, and Stybar might yet enjoy more independence of movement in Czech colours than he does in his regular QuickStep blue, though he downplayed the idea that he would be his nation’s sole leader on the last Sunday in September.

“Roman Kreuziger can also play a really important role in the final and Petr Vakoc is also trying to be in the best possible shape, so we’ll see how everybody is the day before the race,” he said.

Perhaps unsurprisingly, Stybar opted for a Deceuninck-QuickStep teammate when asked to name the man most likely to pull on the rainbow jersey in Harrogate in three weeks’ time.

“If I have to pick one, then then I will say probably say [Julian] Alaphilippe,” Stybar said. These days, it seems the Frenchman can do just about everything. “Exactly,” Stybar laughed, “that’s why.”