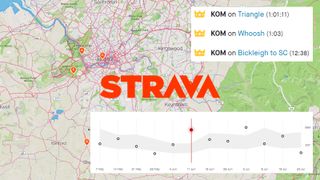 Strava has today announced the latest in a series of updates to its offering, touted as one of the most wholesale changes to the cycling app since its 2009 inception. The app's most defining feature, KOM/QOM leaderboards, will today become a subscription-only feature.

In an open letter to the community, Strava founders Mark Gainey and Michael Horvath wrote of plans to "put subscription at the centre of Strava", but will "always offer a version of Strava for free".

As part of the latest update, Strava has also simplified its subscription model, improved training metrics, and overhauled its website-based route builder tool.

Responding to the rise of gravel as a cycling discipline, Strava's route builder now overlays popularity heatmaps and includes surface types for those who are looking to find - or avoid - the road-less-travelled.

Strava has done away with the Summit brand and the Training, Safety or Analysis package subscription model introduced in 2018. Instead, it has reverted to a single paywall, whereby users either subscribe, or they don't.

As of today, only the top 10 of a KOM/QOM leaderboard will be visible to non-paying users. The rest of the leaderboard, along with an individual's past efforts will also sit behind the paywall.

Free Strava users will still be able to explore, create, flag and search for segments, as well as see their PRs and CRs. However, those who wish to analyse their past efforts, compare results or view results beyond the top 10 fastest (all-time / women) will need to subscribe.

In response to the rise in popularity of gravel bikes, Strava has given its web-based route creation an overhaul, adding heat maps and surface types to the tool.

Strava has long drawn on its active user base to offer 'popularity routing', but has taken this one step further with the latest update. Using its dataset of three billion activities from over 55 million active athletes, Strava has overlaid heat maps onto its base map. This means a user can manually create routes while referencing the most common or popular roads, trails and gravel paths.

Strava's addition of surface types will offer less detail than it's route-planning rival komoot, simply toggling between paved, unpaved and unknown. However, it's that unknown where Strava could find an advantage. Like komoot, OpenStreetMap is used for its vastness and accuracy, yet Strava tells Cyclingnews that if a surface type is unknown, it will look into its huge data in order to infer the surface based on the equipment that athletes are using.

"As you know, members can add bikes or add a pair of shoes. We look at all of that data and we make assumptions based on the type of bike people might be riding to infer whether that's dirt or it might be road," explained Simon Klima, Strava's UK Lead.

In addition, Strava's Segment Explorer is also now built into the route builder itself, meaning routes can now be planned around particular segments much more easily. KOM/QOM hunters, rejoice (we know you're out there).

This route builder overhaul follows the recent update to - and improvement of - route creation and planning from within the app itself. Although the late-March launch coincided with the COVID-19 pandemic and resulted in the news flying under the radar somewhat, as imposed lockdown measures caused an indoor cycling boom.

In the Strava app, the Summit tab has become the Training tab, which focuses on Strava's Relative Effort calculation in order to provide individual-specific analysis. The Training Dashboard now shows all activity types supported by Strava - not just run, ride or swim - and consists of four modules: Weekly Activities, Training Log, Weekly Intensity and Monthly Fitness.

Runners might be familiar with Strava's Matched Runs feature, whereby once a run is completed over the same course as a previous run, additional analysis is available to compare the two activities side-by-side. Matched Rides replicates this feature for cyclists. Both will be available to subscribers only.

Head to Strava to take advantage of the two-month free trial, and to view Strava's open letter to the community.