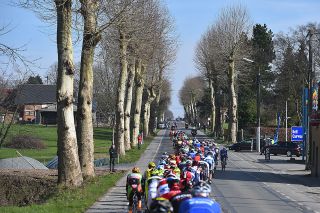 A group of cycling enthusiasts were forced to call a halt to plans to hold an informal cycling competition in Belgium after pressure from the Interfederal Coordination Cell – a consortium of the three Belgian cycling governing bodies, Belgian Cycling, Fédération Cycliste Wallonie Bruxelles and Cycling Flanders.

According to Het Nieuwsblad, the group that calls itself 'Gentsche Wielerterroristen' (Ghent Cycling Terrorists) planned a 17km time trial on May 1 along the Schipdonk Canal and the Vaart, where riders would traverse the course from Deinze to the Speybrug in Vinderhoute.

The group made a statement on Instagram cancelling the event, saying they were "overwhelmed by the negative comments" that the "playful" event elicited.

"We don't want any fuss", Jules Hesters told Het Nieuwsblad on behalf of the group. "It was meant to be fun, in the spirit of Maxim Pirard who rode around the whole border of Flanders [just over 1,000km on April 4 – Ed].

Rik Verbrugghe: I had COVID-19, it was tough but I survived

Evenepoel completes seven-hour Easter ride on the cobbles in Flanders

"Riders race every day with their Strava app. So in every training ride, there is a recorded time. We wanted to make a competition out of that everyday, nothing more. Only it all got out of hand and if it offends people, we prefer to call it off. We can always reorganize it when the coronavirus measures no longer apply."

The group also apologized for spoofing the poster from Kuurne-Brussel-Kuurne.

The controversy led the Interfederal to remind riders that all forms of cycling races are prohibited. "This also applies to competitions with a recorded time."

Belgium's National Security Council will make a decision on 4 May on when sporting competitions will resume. The council previously banned all competition until 1 September but has made no decision yet on whether events can take place 'behind closed doors'.

"What is already certain is that - in parallel with the decision taken earlier on competitions - all recreational organisations will be banned until 30 June. All other ongoing measures will also remain in force until that date," the Interfederal Coordination Cell announced.

"It is of the utmost importance that clubs, riders and recreational cyclists continue to strictly follow the guidelines of the authorities for excursions, individual and club training, so that a possible restart of social life (social and economic) is not hindered or delayed."