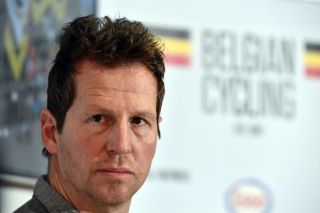 Belgian national coach and former professional Rik Verbrugghe has revealed he suffered greatly after catching what he believes was the COVID-19 coronavirus. He has now recovered and went for a bike ride but told Belgian newspaper Het Nieuwsblad what he went through as he suffered with the symptoms.

"I had COVID-19, it was tough but I survived. Hopefully everyone can stay healthy," Verbrugghe said. "I got the full load. I coughed heavily and felt it on my lungs, that's when I panicked. It's much worse than the flu."

Forty-five-year-old Verbrugghe, who raced for Lotto and then Cofidis between 1996 and 2008, revealed his family also came down with similar symptoms but recovered quickly. He had a fever for eight days.

"I got sick two weeks ago. The children and my wife Claudia [Greg Van Avermaet's sister - ed.] Also caught it but for them it only seemed like a bad cold. They only had a fever for a day but I had a fever for eight days and slept night and day for five days," he said.

"I had pain everywhere. I haven't been tested but the doctor was sure it was COVID-19. But because I could still breathe properly I didn't have to go to hospital and they only test you there.

Team Ineos would pull out of Tour de France if it is not safe, warns Brailsford

"Claudia and the children were shocked and I called the doctor at 10pm at night when I felt the worst. I'd read the reports and was afraid that I would have more breathing problems. Fortunately that was not the case. Three days ago I started to feel better but I'm still tired. Yesterday I cycled for an hour, today more than two hours but I suffered. However, it was nice to be outside."

As of April 17, there have been 36,138 confirmed cases of COVID-19 reported by the Belgian authorities with a total of 5,163 official deaths and 7,961 discharged patients. There are currently 5,161 in Belgian hospitals, including 1,140 in intensive care.

Belgium has the world's highest death rate for COVID-19 at 13.4 percent, according to analysis by Johns Hopkins Coronavirus Resource Center. However, this could be due to the way Belgium reports cases. Belgium was one of the last European countries to impose a lockdown to try to limit the spread of COVID-19. Some isolated outdoor activity is permitted, including cycling, with professional riders still training outdoors.

The COVID-19 pandemic led to the postponement of the Belgian Classics, with the Baloise Belgium Tour [scheduled for late June] the latest race to be cancelled. The Belgian national championships were due to be held in Anzegem, on the new date of August 22-23, but mayor Gino Devogelaere told Het Nieuwsblad that he would not allow the race to be held that weekend after the Belgian Security Council announced it has cancelled all sporting events, mass public gatherings and major summer festivals until August 31.

Verbrugghe does not know how he came into contact with the COVID-19 virus and warned everyone to be careful and respect social distancing rules.

"We have been very careful and followed all safety regulations. Did it happen in a store? Perhaps, but I wouldn't know what I did wrong, so you can see that it can happen to anyone," he warned.

"Everyone should keep paying attention. I once had the flu and I can assure you: this coronavirus is much worse. It was a shock because I'm still young and I'm healthy, I still exercise a lot. This must be hell for older people who are weak."