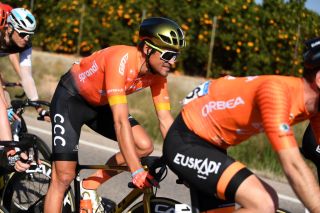 CCC Team will have their best riders at their disposal when they take on the Volta ao Algarve this week. Greg Van Avermaet, Matteo Trentin, Patrick Bevin and Simon Geschke will all line up in Portimão, Portugal, as part of a seven-rider squad for the five-day stage race, which runs from February 19-23.

Van Avermaet and new signing Trentin continue their build-up for the approaching spring Classics, having already ridden well together at the Volta a la Comunitat Valenciana.

"I feel good after five days of racing in Valencia, and I'm looking forward to racing in Portugal," Van Avermaet said in a team press release. "It's good to be back into the racing rhythm as the legs are getting better every day.

"So far, everything has gone well when it comes to building my shape before the Classics season, and the Volta ao Algarve is the next step in my preparations. Of course, I'll do what I can for the team and try to achieve the best possible result.

5 conclusions from the 2020 Tour Down Under

"Looking at the parcours, the two stages that suit me best are stage 1 [Portimão  to Lagos] and the fourth stage, which finishes on the Malhão climb," he said.

A possible overall contender for the team comes in the shape of Geschke, who surprised himself with his form at the Tour Down Under, finishing third overall at the Australian stage race. The Volta ao Algarve will be the 33-year-old German's first European race this season.

"For me, the key stages at Algarve are both the stages with mountain-top finishes [stage 2 to the Alto da Fóia and stage 4 to Malhão] and the time trial [stage 5]," said Geschke. "I'm looking forward to the time trial as it will be a test for me, and for sure I'd like to finish it with a good result. I did quite well at the time trial two years ago and now it's quite similar. I'll try not to lose time on the other stages and ride well in the time trial and, hopefully, I'll have good result on GC.

"It's a really nice race," he said. "I've only done it once but I like the parcours. I think that my shape will be good as, after a strong race in Australia in January, everything has gone well with my training. Coming home with the result I achieved at the Tour Down Under gives me confidence for short stage races."

New Zealand's Bevin, meanwhile, made a successful return to competition at the Vuelta a Murcia last week, having been forced to pull out of the Tour Down Under in January as a precautionary measure after experiencing a supraventricular arrhythmia – an irregular heartbeat – in training just ahead of the race.

Following further medical tests, Bevin's back racing, and targeting the individual time trial on stage 5 in Lagoa on the back of having finished 17th overall in Spain.

"Simon Geschke's coming into the race after a strong performance in Australia so I'm sure he will be motivated to continue racing well," said CCC Team sports director Valerio Piva. "And then Paddy Bevin will also join us, so the time trial on stage five will definitely be a target for us.

"Greg Van Avermaet and Matteo Trentin will also line up together again, so the first objective will be to try to win a stage. We saw them both racing well in Spain, so I think we can build on this further in Portugal," he said. "We have a lot of our Classics group lining up at this race, and, for me, this is important as it allows us to continue working together ahead of the first races in Belgium."