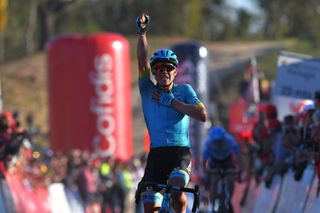 Miguel Ángel López (Astana Pro Team) added to his collection of summit finish victories at the Volta ao Algarve on Saturday, putting in a late attack to cross the line first on the Alto do Malhão.

The win, on his first visit to the race, can be added to an impressive list that also includes Lagunas de Neila, Alpe di Pampeago, Sierra Nevada, Superga and Kitzbüheler Horn. López said that his win was a goal achieved for the race – a victory after his attack on stage 2's Alto da Fóia came unstuck.

"We wanted to win here; it was a logical goal after the second stage when my bid for victory was brought back," said López after the stage. "In the end, we came in together, but the goal was achieved.

"Today is the first fruit of the work we have done," he added. "I believe that the team did a great job as always, and then I had the legs to do it in the final kilometres. We have a victory and that's the important thing."

López jumped away from an elite lead group, which included race leader Remco Evenepoel (Deceuninck-QuickStep) and new second-place Dan Martin (Israel Start-Up Nation) 500 metres from the line after the slopes had whittled down the peloton.

The 26-year-old, now at the start of his fifth professional season, held his advantage to the line for his 16th career victory. But despite lying just one second off Evenepoel heading into the final day, his chances of adding to that total are slim.

Sunday sees the Volta head to Lagoa, concluding with a 20km time trial. It's a discipline he's looked to improve for some time now, with Grand Tours often seeing him shed chunks of time when it comes to the race against the clock.

"The time trial will be key to find out what condition I'm facing at the Tour de France, though it's too early to talk about that," he said. "It will be quite complicated, and tomorrow we will know that we still have so much to improve.

"We will realise that we need to continue working in the time trial, and gradually improve to reach a high level."

So, while overall victory looks out of reach, the test will at least set a marker for the rest of his season, with Paris Nice (featuring a 15km time trial) and the Volta a Catalunya (21km) next up on his schedule.

Much like he did in 2019 with overall victory at the Tour Colombia 2.1, 'Superman' has started his season flying.