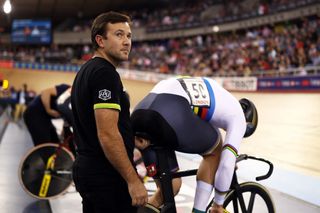 The Australian Cycling Team's track sprint coach, Ross Edgar, has revealed his disappointment at losing his job as a result of the national team's restructure, which was announced last week.

In what was entitled a 'Cycling Australia Departure Statement' on Sunday, Edgar wrote: "CA's latest restructure has sadly rendered myself and my partner Bernie victims of redundancy, effective immediately. No consultation, no compensation, no remorse.

"This gives us 60 days to leave Australia – well, 57 now – with our four-month-old baby boy in the middle of a worldwide pandemic. Thank you Simon," he wrote, presumably referring to the loss of a working visa, while 'Simon' is the Australian Cycling Team's performance director, Simon Jones.

Restructuring announced for Australian Cycling Team ahead of Olympic Games

Jones hired Edgar in September 2017 after Jones was brought in to his position from Team Sky, where he worked as head of performance support and innovation, and was previously the endurance coach at British Cycling.

Former track rider Edgar took the silver medal for Great Britain in the Keirin at the 2008 Beijing Olympic Games – a competition during which British cyclists picked up seven gold medals on the track, courtesy of the likes of Bradley Wiggins, Victoria Pendleton and Chris Hoy, as well as gold in the women's road race thanks to Nicole Cooke.

Edgar also won gold for Scotland in the team sprint at the 2006 Commonwealth Games in Melbourne, and after retirement was a coach at the UCI World Cycling Centre in Switzerland, before joining Cycling Australia.

CA announced on Thursday that 11 roles would be restructured across the track and para-cycling programmes, stating that seven staff members would be leaving their jobs in the "operational restructure", without detailing which roles would be lost or changed.

It continued that a review was always scheduled to take place after the scheduled 2020 Olympic and Paralympic Games, but that the events' postponement due to the coronavirus pandemic – to summer 2021 – had brought the decision to restructure forward.

"While we are very conscious of the timing of these decisions, the deferral of the Olympic and Paralympic Games necessitated these changes being made now, and they're in the best interests of the athletes and the broader performance team," Cycling Australia CEO Steve Drake said at the time.

In his statement on Sunday, Edgar continued: "I had always resolved to finish what I'd started, despite any day-to-day trials and tribulations, and we'd planned on returning to Europe post-Games, but now, with unfinished business and a heavy heart, our return has been brutally brought forward."

Edgar went on to thank his fellow staff members and the riders he'd worked with, adding that he and his partner were "deflated but not defeated".

Edgar's statement can be read in full via Twitter below.