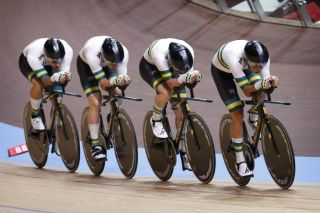 Cycling Australia announced on Thursday that the Australian Cycling Team – the national squad of athletes and coaching staff, from which the elite riders represent the nation in international competition – is undergoing an "operational restructure" ahead of the lead-up to the rescheduled Olympic Games, resulting in the departure of seven members of staff.

A press release stated that a review was always scheduled to take place after the completion of the scheduled 2020 Olympic and Paralympic Games, but that their postponement until next summer had hastened the restructuring.

"The review was brought forward to ensure a smooth transition to new operations ahead of the rescheduled Games in 2021 and a shortened performance cycle through to Paris 2024," read the press release from Cycling Australia.

It continued that the restructure "does not represent a change of strategy, but rather a refinement of the way the current strategy is delivered".

While it was not stated which roles would be restructured, it said that the primary focus was on the track and para-cycling programmes.

"Eleven roles will be restructured, resulting in seven staff members leaving the team, with a further four staff members being offered refocused roles," the statement read. "The Team will recruit a number of new roles including a Director of Coaching and Director of Performance Pathways."

The Australian Cycling Team's performance director, Simon Jones, said that the postponement of the 2020 Tokyo Olympic and Paralympic Games until 2021, along with the interruption to normal training activities as a result of the coronavirus pandemic, meant that it was "in the best interests of the entire program to complete a review and to implement this restructure now".

Jones continued: "The period post-Tokyo 2021 will see a condensed competition phase that includes the 2021 Road and Track Cycling World Championships, [and the] Paralympic and Olympic Nation/World Cups, followed shortly by the Birmingham Commonwealth Games in 2022, which is a major objective for the team.

"We believe these changes increase our chance of success in 2021 with more focussed and strategically aligned teams, and at the same time we will look closely at our pathway strategies over the coming months to ensure we have a surplus of talent creating upward pressure in the pathway to meet Cycling's 2024 and 2028 medal potential."

Cycling Australia CEO Steve Drake said: "While we are very conscious of the timing of these decisions, the deferral of the Olympic and Paralympic Games necessitated these changes being made now, and they're in the best interests of the athletes and the broader performance team."

Cyclingnews has contacted Cycling Australia for further comment as to which members of staff will be leaving.