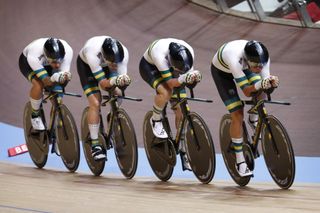 Following the decision by the Canadian Olympic Committee (COC) and Australian Olympic Committee (AOC) on Sunday and Monday, respectively, to pull out of the 2020 Olympic Games, Cycling Australia performance director Simon Jones has told the media that the national cycling team will now take stock of the fact that they could now be aiming for a postponed Games, which could take place in around 16 months' time.

International Olympic Committee (IOC) member Dick Pound said on Monday that the Games would be postponed as a result of the ongoing worldwide coronavirus crisis, although there has not yet been an official announcement to that effect by either the IOC or the Tokyo 2020 organising committee.

"The decision yesterday by the AOC to not participate in the Tokyo 2020 Games came as a pretty big shock," Jones told media outlets, including Cyclingnews, in a conference call on Tuesday morning.

"The news was broken by the AOC. They actually wrote directly to the athletes, the long-list members, first," he said. "I've not yet spoken to all of the athletes; we're mainly leaving the coaches to communicate with them. But I've spoken to some face to face, as we were actually training at the track [Adelaide Superdrome] yesterday before the venue was closed."

'We're going to go through a period of pause'

Asked how Australian Cycling Team athletes and staff had taken the news, Jones said that the most important thing to do was not make any rash decisions. While the Games have still not yet been officially postponed, the implication is that Australia's athletes now have to look ahead to a Games that could be rescheduled for some time around July 2021.

"The first thing you have to do in these instances is let people absorb the information," said Jones. "Given how we won't now be competing in the Games [as planned this summer], and the Games aren't cancelled at the moment, we're going to go through a period of pause.

"We're not going to be pushing ideas at the moment, because I don't think we need to. It's really important from a mental-health point of view to let people absorb it in their own way," he said. "They know where the support is; they know who to contact. Clearly they've got their families, they've got their friends, they've obviously got their coaches and our performance support staff, which includes performance psychologists, who they've all got really good relationships with.

"People will go through all sorts of thoughts and feelings over the next day, week, maybe even month," continued Jones. "Some athletes may have been thinking about retiring after the Games. Now, that's changed. So there are a lot of decisions to be made, and a lot of conversations to be had in the short term, just to let people absorb it and be heard, and our advice at the moment is to not make quick decisions given the situation.

"We don't need to," he said. "But I guess we'll start planning for what we believe will be a northern-hemisphere-summer 2021 Games, so we have a little bit of time."

Jones added that he thought the decision made by the AOC to pull out of the Games – presumably with some confidence that they would be rescheduled – was the right one.

"It was a big call, but I think it does put the safety and the health of the athletes and the staff as the number-one priority," he said. "It would have got increasingly difficult to train, and I think if we take a global view on this – when you think about what other nations are trying to do to train – there are some pretty extreme things people are trying to do to keep fit.

"Now the [Australian] sports facilities are shut, and we've said to the coaches that we don't want any face-to-face training sessions, and we've also asked riders to train on their own if they go out on the road, and not train in a group, as I don't think that's a good look. We're quite visible as cyclists, so I think as a national team we have to be training discretely and looking after our health," he said.

"Dealing with people's wellbeing and mental state is the number-one thing. This will impact people in very different ways," Jones reiterated, "and I don't want us to be steamrollering into training conversations at the moment. The Olympics could still be 16 months away, so we're just trying to slow things down here. Decisions made now might not be the right decisions in a few months' time.

"We were planning to have a fallow year in 2021 – a period of slowing down a little bit, of reflecting, learning, growing – so I think we'll now bring that forward," he said.

Jones also took the opportunity to update the press on the situation regarding the Australian Cycling Team staff member who was taken ill and tested positive for the coronavirus last week.

"He's out of hospital, and making a good recovery and feeling a lot better, so that's a big relief to all of us," Jones said. "All other tests we had done as a precaution have all returned negative as well, so it was a bit of good news in amongst the bad news, I guess."