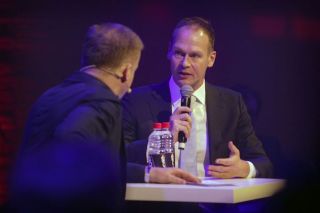 Team Sunweb general manager Iwan Spekenbrink is the latest person from the world of cycling to comment on the uncertain future of the Tour de France, which could yet be postponed due to the Covid-19 coronavirus pandemic.

The Dutchman said that safety is the number one priority factoring into any decision about the Tour's future, and that government advice and rules have to be followed before racing can return.

"The Tour de France continuing or not depends on many factors, but most important is safety," Spekenbrink told Cyclingnews. "It should only be an option if the official authorities state that it is possible."

France is currently in lockdown, enforced in mid-March, as the country attempts to slow the spread of the virus, which has hit countries around the world over the past few months. Sports events around the world have been postponed or cancelled, including the Tokyo Olympic Games, while the Tour remains the largest event of the summer still in limbo.

"There are differences with [the Tour] and Olympics," he said. "Qualification is required for the Olympics, and the time for the remaining qualifying rounds is running out. Furthermore, the Olympics takes place one in four years, so for most of the athletes it's a unique chance for a medal. Everyone wants to be prepared in the best possible way.

"For the Tour this slightly different – it's held annually. And there will be a fair chance for everyone probably from 2021 onwards.

"That difference between the annual character of the Tour and the unique four-year character of the Olympics raises the question for this cycling season: shall we leave it, or do we make something of it for the teams and their riders, for the sponsors, and for the fans?"

Spekenbrink added that if the Tour is given the green light to go ahead then there would have to be enough time beforehand for riders to train outside for the race. Then there are consideration about the calendar, the length of the race, and if it will be held 'behind closed doors' with no spectators allowed.

As of Saturday morning, reports emerged that race organisers ASO had set a deadline of May 15 to decide what will happen with the premier event of the racing calendar.

"If the cycling world answers that question with 'yes', then it is important that all participating riders must be able to train outside for a determined minimum period, in order to be as good as possible in this special situation and to create relatively fair opportunities for all participants.

"And if the cycling world answers that question with 'yes' and concludes that it is important to make something of the season, then it will have to be seen in what form the Tour can be ridden: can it be on the current date, or should/could it be later, for example in August?

"Will it run with or without an audience? Cycling is of course a sport of the people, but if the 15 million people along the road cannot be there this year, the few hundred million people will still be reached all over the world via TV and the internet.

"In short; it must be safe, and if the cycling world concludes that it is valuable to make something of this season, it will be looked at in what form the Tour can be held."