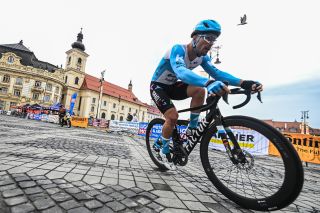 In previous years, the Sibiu Cycling Tour was always overshadowed by the Tour de France and other races like the Tour of Austria or the Tour of Qinghai Lake happening concurrently. But this year, everything is different: all those races either postponed or cancelled their 2020 editions, giving the Romanian stage race the prestige of being the first UCI 2.1-ranked event to take place since racing was stopped in March due to the coronavirus pandemic.

That status, as well as the participation of WorldTour teams Bora-Hansgrohe and Israel Start-Up Nation, has brought much attention to the race, with the Transylvanian city of Sibiu being transformed into the centre of the cycling world for a few days this July.

Originally planned to be held from July 2-5, the race organisers made the decision in June to postpone the race by three weeks in order to wait for travel restrictions to be lifted and have more time to properly implement all measures prescribed by the national health authorities and the UCI protocol regarding COVID-19 measures, which were first published on June 19.

As set out in the UCI protocol, all teams were required to perform PCR tests on riders and staff ahead of the race, and everyone must fill out a questionnaire about symptoms twice a day, as well as temperature checks being performed at the team hotels.

The race organisation has distributed hundreds of race-branded masks, as well as many more single-use masks, to volunteers, race staff and media crews. In addition to the measures prescribed by the UCI, people from the race organisation and media who might come into contact with the riders, including this writer, underwent PCR tests as well.

At the team presentation, riders, team staff, media and organisational staff were required to wear face masks at all times, and there were no spectators allowed in the centre of the Piața Mare town square. For the prologue, the requirement for riders and team staff to wear face masks was relaxed, but all other members of the various race bubbles still had to mask up.

'We don't have any reservations about racing in Sibiu'

Cosmin Costea, the Sibiu Cycling Tour's route manager and COVID-19 coordinator, has worked hard in the past weeks in close cooperation with the national health authorities and the UCI to clarify procedures and prepare for the race under different circumstances, and explained the procedure for a suspected case of the coronavirus.

"A PCR test will be performed on the rider or staff member. If the test is positive, the affected team, or possibly several teams, will be removed from the race, or the race may have to be stopped altogether," Costea said. "The positive rider will have to be admitted to hospital, and his teammates put in quarantine. But that's the worst-case scenario. Now that we have reached our first goal of getting the race under way, I'm hoping for a safe, healthy, and successful race."

The surprise winner of the prologue, Nikodemus Holler (Bike Aid), provided an example of the view of the many Continental teams on the start list: "We have been coming to Sibiu since 2012, and we wanted to get racing again. The extra cost of the PCR tests is considerable for a Continental team like us, but the extra measures, as such, are not so unusual for us. We often race in Africa or Asia where we encounter special situations, and now it has become the same here in Europe."

The presence of two WorldTour teams at the Sibiu Cycling Tour – a first for the Romanian race – can be explained by the teams' eagerness to get racing days under their belts once racing started again, but their presence, despite a recent surge in COVID-19 cases in Romania, is also a statement of confidence in the race organisation.

"In our team, we implemented the UCI protocol, as well as our internal measures, well," Israel Start-Up Nation sports director René Andrle explained. "Everybody in the team got tested on Saturday before travelling to Romania.

"I feel that the situation has been managed well by the organiser, so we don't feel anxious in that regard. It is an unprecedented situation for everybody, but we don't have any reservations about racing in Sibiu," he said.