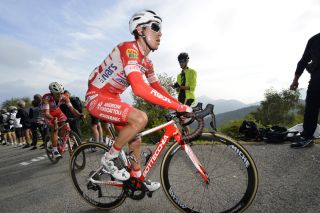 The Androni Giocattoli and Gazprom-RusVelo teams have pulled out of the Sibiu Tour in Romania that was due to start on Thursday, due to the growing number of new COVID-19 cases in the Eastern European country.

The four-day Sibiu Tour is scheduled to be one of the first international professional stage races in Europe since the start of the COVID-19 pandemic in March. However, last week Mathieu van der Poel and his Alpecin-Fenix team pulled out of the four-day race after the Dutch Foreign Ministry labeled Romania an 'orange zone', advising "only necessary travel" to the country.

The Bora-Hansgrohe and Israel Start-Up Nation WorldTour teams are due to ride the Sibiu Tour, with sprinter Pascal Ackermann and Patrick Konrad due to lead the German team. Bora-Hansgrohe confirmed to Cyclingnews that they currently intend to race but said they are carefully monitoring the situation. Other teams on the entry list include Nippo-Delko, Vini Zabú-KTM and Bardiani-CSF.

According to reports in Italy, this latest information led the Androni Giocattoli team doctor Maurizio Vicini to advise against travelling to the race to protect the health of riders and staff. Androni Giocattoli's first race will now be Strade Bianche on August 1 in Italy.

Gazprom-RusVelo announced via social media that they were unable to take part in the Sibiu Tour due to the restrictions on Russian citizens in Romania.

A record number of 899 new COVID-19 cases were discovered in Romania on Saturday, according to reports, with the Romanian constitutional court blocking the government from forcing people to serve a 14-day period of quarantine.

As a result, some 750 people who had tested positive for COVID-19 have left Romania's hospitals against medical advice, according to the latest figures from the country's health ministry.

On Sunday the Romanian government extended the country's state of emergency for a further 30 days, warning that the number of infections will keep rising and if the current upward trend continues, up to 1,600 new daily coronavirus cases could be expected in mid-August.