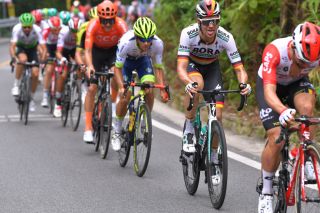 After Pascal Ackermann recorded his 12th victory of the season on stage 3 of the Tour of Guangxi, there was a jubilant mood at the Bora-Hansgrohe mini-van in Nanning. Max Schachmann was among the riders celebrating a job well done but took a moment out to talk about his season, safety and his plans for 2020.

The 25-year-old had been one of the strongest riders of the spring this year, winning five races including stages at the Vuelta al País Vasco and Volta a Catalunya, as well as finishing top five at each race of the Ardennes Classics.

But when asked about his 2019 campaign, Schachmann instead zeroed in on the Tour de France, and the crash that derailed his debut at the biggest race of the year.

"I have been happy with this year," he told Cyclingnews. "But I was just about to get in shape during the Tour and in the time trial I was on the way to finish top five, maybe. Unfortunately, I crashed on that corner like Wout Van Aert.

"I don't know what happened but maybe the barriers changed after the crash. So I missed 20cm of road and broke my hand. It took a while [to recover] and I still have pain there. I think it's not easy to get back into shape for that."

Such a prolonged recovery from his injury – Schachmann only returned to racing earlier this month – means that he's not back to top shape so late in the season, and a possible GC bid on stage 4's hilltop finish might not come to pass.

A crash early on stage 3 won't have helped either, with the German champion sporting torn shorts and a bloody elbow after hitting the deck on a piece of poorly maintained road.

"On the whole lap there was one square – half a metre by three metres – where they took the asphalt away, and I hit the edge I didn't see and crashed. It was really bad luck.

"You have like 20,000 Chinese police or volunteers watching out for the parcours, but nobody is there where the real danger is. It's pretty ridiculous.

"I'm coming from a long break and I didn't have the best preparation, so we'll see how the legs feel," he added, referring to Sunday's stage to Nongla Scenic Area. "It's going to be much harder than stage 3, for sure, so I don't know yet."

Schachmann was instrumental in assisting Ackermann's victory on Saturday, shadowing moves on the run-in to the finish, which included a climb just 5km from the line. With a strong move from Guillaume Martin (Wanty-Groupe Gobert) kept in check and a reduced group racing to the line, he and the rest of the Bora squad carried out their duties to a tee.

Still sweating from the effort on a hot, humid day in central Guangxi, Schachmann said that before the stage it wasn't clear whether it would be a day for sprinters or puncheurs, but that the first several laps showed that Ackermann could survive at the head of the race.

"Our task – Felix Großschartner and me – was to watch out, follow attacks and possibly go in a small breakaway. Or just to keep the bunch together if Pascal was there.

"I saw him climbing at the front, so basically we followed all the attacks until the bridge [at 1km – Ed.] and then Mitchelton-Scott were there to make the pace. Acke was in a perfect position, in a good wheel, and he could finish the job."

With just four days of racing left in Schachmann's season, it's no surprise that 2020 is high in the mind, even if a well-earned rest is on the cards first. He told Cyclingnews that he has a broad outline of his goals, but nothing is set in stone just yet, though further progress – after successfully building on his 2018 breakout season – is the main aim.

"I think the Ardennes Classics are going to be a big goal again, but also races like Tirreno, Catalunya – there I already won two stages. I think there are quite a bunch of races that suit me well.

"I'm pretty sure that I'm still developing," he added. "I'm really convinced that I can still take another step forward."