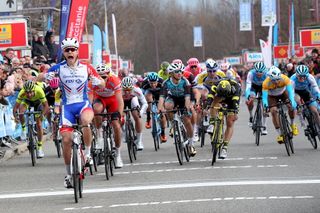 The flurry of transfer activity at AG2R La Mondiale continued on Tuesday with the announcement of the arrivals of Marc Sarreau and Damien Touzé for the next two seasons.

A day after it was confirmed that Greg Van Avermaet will join from CCC Team, along with Michael Schär, and that Romain Bardet will depart for Team Sunweb, the French squad added their fifth and six new faces for next season, when they will be rebranded as AG2R Citroën Team.

The 27-year-old joins from Groupama-FDJ, where he has spent all six years of his professional career so far, but he is currently sidelined after separating his shoulder in the horrific crash on the opening stage of last week's Tour de Pologne.

"Over the course of the discussions, I was attracted by Vincent Lavenu's descriptions of the project focusing on the Classics and sprinting opportunities, which in the end convinced me," Sarreau said.

"I still have personal ambitions and I still want to improve. I know that the level will be very high with great leaders for the Classics like Oliver Naesen and Greg Van Avermaet, and it will be very motivating to be with them at the biggest races on the calendar. From a personal point of view, I am focused on a victory for myself in the UCI WorldTour, which continues to be my goal."

Touzé, meanwhile, will join from the third French WorldTour team, Cofidis, where he has spent his first two seasons as a pro.

The 24-year-old all-rounder finished third at the French national championships road race last year and seventh overall at the Etoile de Bessèges earlier this year. He is also currently sidelined as a result of the Pologne crash.

"The project to focus on the Classics around Oliver Naesen convinced me to join. I want to progress in this area and to help the team win a Monument. I like those races, and I think the profiles suit my strengths well.

"I know that the level will be very high on the team, but that makes it all even more motivating. From a personal point of view, I want to win a race. I was not far away from a win last year, in particular at the French Championships, so now it is up to me to make it happen."

Sarreau and Touzé take the number of new faces at AG2R for 2021 up to six, following Van Avermaet and Schar, plus more Classics reinforcements in Stan Dewulf and Gijs Van Hoecke. It's a season of change, as stage race leaders Romain Bardet and Pierre Latour are moving on to pastures new, while Citroën arrives as new co-sponsor.

In announcing the signings, team manager Vincent Lavenu declared Sarreau and Touzé as "riders for the future."

"Marc Sarreau already has a great deal of experience. He has won regularly since he joined the professionals. He is very close to getting a great victory in the UCI WorldTour and we are going to do everything to ensure that he succeeds," Lavenu said.

"Damien Touzé is younger but he has already shown his qualities as a puncheur, especially last year by finishing third at the French Championships. He aspires to progress in order to get closer to the best. He and Marc Sarreau are two riders for the future."