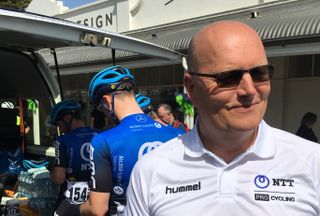 Bjarne Riis at the Tour Down Under with NTT Pro Cycling (Image credit: Stephen Farrand)

NTT Pro Cycling manager Bjarne Riis has said professional cycling must stay united as it tries to survive the COVID-19 pandemic, criticising fellow team manager Dave Brailsford for saying he would pull Team Ineos out of the Tour de France if he felt it was not safe to race. Riis made it clear he is ready to trust the UCI and race organisers to ensure rider safety so that racing can resume and save teams from disaster.

Riis and fellow manager Doug Ryder spoke to a number of international media, including Cyclingnews, via Zoom on Thursday, confirming they have agreed with riders and staff to reduce salaries during the COVID-19 pandemic so that the team is able to compete in the autumn, when it is hoped the Tour de France, Giro d'Italia, Vuelta a España and other WorldTour races can be held.

The team is trying to negotiate an extension of its sponsorship with global technology services company NTT, with Danish window brand Velux a possible title sponsor for 2021. Despite being caught up in a perfect storm of uncertainty both Riis and Ryder put on a brave face.

"I disagree with Brailsford who said last week that they would decide whether it was safe or not," Riis said bluntly.

"It is not for him to decide on that. Governments and organizers will do that. I know Christian Prudhomme very well. He really won't run a Tour if it's not safe.

"Everyone in cycling has to work together. We have to do the best for cycling, not for ourselves. That's why I'm not happy with what Brailsford says. It's selfish. At the moment it is not about yourself, but about the whole sport."

Riis and Ryder seemed ready to accept racing being held in a closed, control environment, so that at least some of the race calendar, and especially the Tour de France, can be saved and so offer some kind of return on investment for sponsors and provide real racing for fans.

"If we want to be 100 per cent safe then we'll probably have to stay at home for two or three years. I can’t imagine that the UCI would let a race go on if it wasn’t safe," Riis said.

"I think we learnt a lot at Paris-Nice and we felt safe, so it is possible to do a race. It's not up to me or you to decide, we have to let the experts decide."

"Cycling needs to go on but under the right circumstances. If that's behind close doors then that's how they have to do it but we can hope there will be spectators. The important thing is to race," Ryder said.

Riis and Ryder have been holding weekly catch-ups with all their riders and staff, with directeur sportif and coaches in more frequently contact, supporting their riders mentally and ensuring they are focused on their training and even using the COVID-19 lockdown to work on any weaknesses.

Cyclingnews understands riders have offered to accept salary cuts to keep the team alive and in the hope NTT will extend their sponsorship to 2021 and beyond.

Ryder confirmed budgets cuts have been made, also due to a lack of race start fees and expenses but did not give details or specific numbers. Under UCI rules no rider can be paid below the UCI minimum wage of €38,000.

"We have made salary adjustments with riders and staff to try to help the long-term sustainability of the team," Ryder confirmed. "We know it is a decisive year for us. Now it is a very tough time to have those conversations with our sponsors right now.

"For many teams, us included, it’s critical that racing happens again this year, and that it’s in an environment that’s safe. If racing doesn’t happen, it’s big for the teams. We are fortunate that we have amazing partners that support us.

"Every team is different, but no sponsor pays its full budget on January 1," Ryder pointed out. "That fact that we’re not racing means the teams are losing money. With the Spring Classics and the Giro d’Italia, there are a lot of appearance fees that are weighted in the first part of the season that goes toward the costs of running the team.

"Some sponsors are waiting to defer payments until racing begins again. It’s a very complicated puzzle for every team. The biggest piece is salaries and people, and we are trying to deal with that in the right way."

Riis confirmed that he and his business partners still have to complete the purchase of a share of the team but he and Ryder brushed off any doubts about the deal not going through, insisting they get on well and are focused on making the team one of he best in the peloton.

Riis seems to have brought a clearer vision, sporting leadership and determination to the team, with Giacomo Nizzolo winning a stage at the Tour Down Under and another at Paris-Nice. Max Walscheid also won two stages at Le Tour de Langkawi.

Riis is convinced his riders will be ready to race and win again if and when the season resumes. He seemed to relish the challenge of racing three Grand Tours, the Classics and other races in just three and half months between August and November.

"The most important thing is to be ready from the gun. I know we will be ready, we already are," Riis said.

"It’s going to be tough racing, tough logistics. Everyone needs to work hard, then it will be okay. We have to deal with what it is. We know that 'tomorrow' things could be different but we will adapt to it. All we can do is stay strong and be ready for when we have to be ready. We could cry and not know what to do or we can use this situation to be creative and smart. I hope we do that as a team."

Riis is still considered by some as in the sport as 'persona non grata' after he admitting to doping during his own career and was accused of helping the likes of Tyler Hamilton to dope at the CSC team.

Since his return to the sport with NTT Pro Cycling this winter, Riis seems more contrite and apologetic. He called on the likes of Brailsford to make constructive suggestions on how to improve the sport after the COVID-19 pandemic rather just complain.

"Maybe this is an opportunity to do things better," Riis suggested of cycling fragile business model.

"The stakeholders – the teams, race organisers and riders – really need to come together and talk and make a proper connection. I've never seen that because they're always fighting but we need suggestions. I hope we can soon start racing and see some leadership in the future."