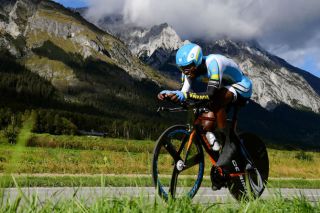 Rwanda's Joseph Areruya in the under-23 men's time trial at the 2018 World Championships in Innsbruck, Austria (Image credit: Getty Images)

If successful, Rwanda would become the first African nation to host the Worlds, which "would spark a considerable popular enthusiasm beyond the borders of Rwanda", a press release from the Tour du Rwanda organisation read.

"An official delegation of the Government of Rwanda submitted its application at the UCI headquarters in Aigle, Switzerland, to its president, David Lappartient, on Wednesday, September 12," it said.

The UCI announced in July last year that Lappartient had invited bids from African nations to host the 2025 Worlds, and La Gazzetta dello Sport reported last November that both Rwanda and Morocco were bidding for the championships.

The Tour du Rwanda has been running since 1988, and has been part of the UCI Africa Tour since 2009, and has since attracted a number of WorldTour and Pro Continental teams, including Team Novo Nordisk, Israel Cycling Academy and Direct Energie. This year it was won by Eritrean rider Merhawi Kudus of Astana.

"With its proven experience of organising the Tour du Rwanda for 11 years, Rwanda now wants to write a page in the history of cycling by becoming the first African country to organise the World Championships," read the press release.

"Such an event in the streets of Kigali, the capital city, would spark a considerable popular enthusiasm beyond the borders of Rwanda – a country that has become by courage and conviction an example of success in all areas.

"Sport is the best proof, and the organisation of these World Championships in 2025 would be a great message of hope for all the African continent, but also for the big family of cycling, which has been focused for years on the internationalisation of its sport," it said.

The UCI has also already announced that the 2022 championships will be returning to Australia, and will be held in Wollongong, New South Wales, while Glasgow, Scotland, will host the 2023 Worlds before they return once more to Switzerland, and Zurich, in 2024.