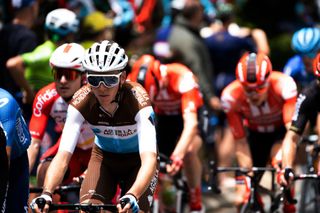 Romain Bardet's hopes of overall success at the Tour Down Under ended on stage 2 when a damaged derailleur led him to lose two minutes but the Frenchman bounced back on stage 3, finishing 11th, just 15 seconds behind stage winner Richie Porte (Trek-Segafredo).

Bardet travelled to Australia after the Christmas holidays to start his season early after ending his 2019 season at the Tour de France. He won the polka-dot jersey as best climber but was deeply disappointed with his 15th place overall and inability to compete as in the past, as French rivals Julian Alaphilippe and Pinot Thibaut fought for stage victories, the yellow jersey and the admiration of the French public.

Bardet has opted to miss the 2020 Tour de France and instead target the Giro d'Italia. He was keen to show his form at the Tour Down Under after a winter of mixing cyclo-cross racing and track work with his road training but lost any hope of overall success due to his mechanical problems.

"A guy came from the back and hit me hard, so I had to stop and then fight to get back on. Then I had to get back on another time after trying to get a new wheel. My overall chances are over for sure but you can't do anything about it," Bardet explained to Cyclingnews with a shrug of the shoulders on Friday.

"It's a pity but I was here to start my season on the front foot. It would have been good to be in contention for the GC but sometimes things happen in cycling that you can't control. We have a good guy in Andrea Vendrame, he's well placed overall, so we'll work for him and see what we can do."

Bardet could be a contender for the final stage on Willunga Hill on Sunday but conceded he is not on the same form as overall favourites Richie Porte, Rohan Dennis, Simon Yates and Daryl Impey.

"The race is pretty controlled and so it won't be easy to have any freedom but I want to test my legs and my form, so perhaps I'll try to see what I can do or what we can do as a team," he hinted.

Despite his misfortune, Bardet has no regrets about travelling to the Southern Hemisphere for the start of 2020.

"It's been a very good trip, I'm happy I came to Australia. It's easy to get carried away by the early racing because it feels like the summer but I'm going to have a long season, so I have to take things step by step," he said.

Bardet will return to France on Monday after almost a month in Australia. His next race will be the short Tour du Var stage race in southern France between February 20-23.